Wake Up America: Wal-Mart is Not a Charity

Now if you read the employment fine print that says that seasonal corrections from the past have been applied to this number, you'll soon find out that the reality is that unemployment is still harshly on the rise. 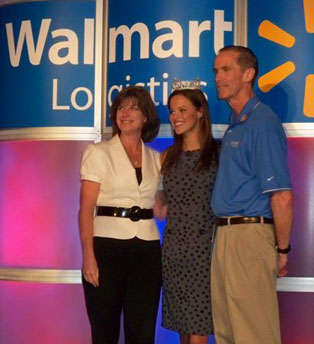 Why is it that the media use the words “unexpected” and “surprised” when announcing that once again jobless claims have gone up followed a single day later with the “surprising” Government statistics that unemployment has fallen from 10% to 9.7% over the month of January. Now if you read the fine print that says that seasonal corrections from the past have been applied to this number, you’ll soon find out that the reality is that unemployment is still harshly on the rise.

Then you look at the freshly published new figures for our National Pride and Joy, Wal-Mart, to learn that their new corporate strategy of improving “growth, leverage and returns” in essence means:
1. Their growth projections are focused on international expansion
2. Their leverage efforts will result in squeezing manufacturers to price levels they can not possibly realize in the US, hence outsource and move jobs out of the country and
3. Returns means that they will start a program to dominate customer returns for about every product group they can deliver. Since WalMart (I’m tired of putting that little dash in there) is now America’s largest supermarket as well, the next focus is pharmaceuticals and OTC drugs, but it won’t stop there.

Speaking to investors last week, WalMart Vice Chairman Eduardo Castro-Wright said that the steps would help “facilitate our growth as we seek to enter new markets and develop new segments across the U.S. and will drive efficiencies by allowing us to better leverage our resources.”

Translated into laymen terms that means: “We are looking at every form of retail and wholesale in the United States that WalMart’s buying power and distribution system can outperform.” Of course in the best interest of their customers and shareholders.

WalMart President and CEO Mike Duke wrote in a carefully crafted script full of public relations terminology; “Last fall, we laid out three strategic priorities to deliver even more value for both customers and shareholders: growth, leverage and returns. Each move has been designed to help us become more global, take advantage of our scale, and move our business even closer to the customer.”

Mr. Duke continued with the explanation of why WalMart and Sam’s Club have laid off some 14,500 employees in the past year, explaining that last Wednesday’s cut of 300 headquarters workers completed a yearlong series of changes to its corporate structure, claiming it to be the last major change. The 300 workers include people in corporate affairs, finance, human resources, information systems and legal departments. “With this last major strategic piece in place, we are beginning our new fiscal year with every part of our business focused on being even more responsive to our customers,” Duke said, as WalMart started its new fiscal year on February 1st. From the world’s largest retailer with $404 billion in sales last year, you would expect a bit more encouraging wording to a Nation that wonders about the future role this giant will play in their lives.

It is not surprising that WalMart has been able to grab wealthier consumers trading down from higher-priced stores during the current recession. Yet the company also has noticed signs of growing financial strain among its core customers, including more pronounced swings in spending between paycheck cycles, which could lead to an even greater push of store brands versus brandname products.

In order to understand this business process, imagine this scenario: WalMart as the largest buyer of any brandname pushes for lower pricing until the total production output of a company, or almost total is consumed by WalMart stores. From one day to the next WalMart notifies the brand that they will no longer feature their products on their shelves unless _______ (fill in the blank like Rubbermaid). The Brandname is up for grabs at that point and WalMart’s next step will be to move production to a financially more attractive supplier, often outside of the country.

For 19 years WalMart featured Always Low Prices as their slogan, but in the early stages of this recession they noticed that more upscale customers were flocking to the stores, which means that there would be a competitive element entering the market, especially if WalMart wanted to compete with upscale merchandise. In that case, lowest prices would not always be possible. It became time to change the slogan and take a better look at competitor Target which was “Expect More, Pay Less“. Never having shied away from some copy catting, (Always on their stores was a proven Coca Cola success) WalMart came up with “Save More, Live Better“ incorporating the emotional theme of lifestyle. This now created the opportunity for the retail giant to open hunting season on every lifestyle retailer in the marketplace.

And the reason WalMart can continue this is because of the “American consumer’s insatiable desire for bargains”.
Yet somewhere in that process was a slogan that said: “We buy American, so you can too!” http://www.pbs.org/wgbh/pages/frontline/shows/walmart/view/ Sorry, no more.

Wake up America, WalMart is not a charity. It goes where its profits are. As a free market economist I admire WalMart’s single minded focus on Capitalistic Principles and the fact that they have long passed the point of economy driven momentum. WalMart simply has set out to be everything to all people, customers and shareholders that is. Everything else, including employees and suppliers is expendable. Just because origin and headquarters are somewhere in Northwest Arkansas does not mean that Sam Walton’s disciples don’t have their eyes set on the world.