Wall Street Volatility is Going to the Streets

We are learning how to kick our problems into next week, month or year, which brings fear one week and greed the next and that creates a highly volatile market. 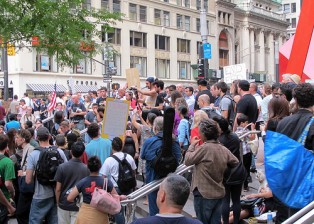 Take Back Our Country is a Message in itself

I get a couple of hundred emails every day and a good percentage lately is from people who ask why we don’t publish more on the financial markets and frankly the only answer I can give is: I’m getting bored by manufactured “volatility,” so much actually that I’m not even active in the market anymore, not even shorting a bunch of stocks like Kodak or AMR (American Airlines). The same jojo is operating in the foreign exchange markets. It’s just too volatile and in my case it has become a bit boring.

I only look at the market on my Mac Dashboard on Friday afternoons these days and what I see is the same cycle “repeat, rinse, repeat” week after week. A message about a weaker than expected job creation in September and the market crashes a couple of hundred points. Except of course big oil that sees a job lift of 103,000 as a reason to up the barrel price. Some light in the tunnel of the European debt situation, never mind that it still is the headlight of an oncoming train, and the market jumps a couple of hundred points and every analyst is predicting the start of a rally. This morning Yahoo Finance had two contradicting stories about oil prices, listed right next to each other.
As far as I’m concerned the market is full of forecasters in financial and economic fields that have swallowed their predictions a couple of dozen times in recent months. And I think it is rather stupid that some of them try to draw medium or long term implications from single day fluctuations. We’re just living in highly volatile times, fed by alternating fear and greed.

When confusion becomes the daily grind

Europe will remain a big question mark until they run out of road to kick the can down to until it sinks in the Mediterranean. I see it as living on a one way dead end street or if you want Cul-de-Sac. This afternoon the Dow closed at 11,103 and the S&P at 1,155 and everyone is worried. Less than 2 weeks ago there were days the Dow fell way beneath 11000 and Armageddon was reportedly on our doorstep. We are all in the process of learning how to kick our problems into next week, month or year, which accounts for fear in one week and greed in another and that creates a highly volatile environment.

Right about exactly a year ago we were in a similar volatile market at about the same levels. The Piigs in Europe were frontpage news, the budget deficit frightening, none of the stimuli were working, the housing market was dead and the industrial nation governments collectively started kicking cans down the road by essentially pushing new bills into the market place. We’ve seen since then grocery spending almost double with less items in the shopping cart. Oil was $82 a barrel 52 weeks ago and the gas price per gallon was an average $2.80. Today at the same price per barrel, the gallon price remains close to $3.50! The Banks are sitting on $1.5 trillion in untouched cash from government stimuli and for the first time in history mortgage rates have dropped below 4%. Will it increase demand for housing, new or existing? Not a chance. First of all, you will have to give the banks your first born as collateral if you want to qualify based on the outdated credit rating system, and secondly….times are just too volatile for most people to commit to the long term.

It’s the middle class that’s getting hammered and considering the voracious  appetite of still expanding governments on national and local levels, the middle class is looking at getting taxed out of existence. And that puts a damper on the essence of our democratic society. Because frankly there is no democracy if there is not a large middle class. The problem is that too many are still hoping that miraculously the days before the 2008 crash will return, and therefore none of the underlying behaviors that caused the crash nor basic economic fundamentals have been addressed.

So instead of reporting on Wall Street’s volatility dance, I look at the ongoing and widening display of anger and confusion of tens of thousands of protesters who are currently roaming the streets of Downtown New York, with a movement into Washington as was reported today, because even though they seem to not have a clear objective for their actions according to the ridicule of the mainstream media, it only takes one messianic person to bring them together in their effort to Take Back Our Country and market volatility could turn into something much more serious.