Want To See A Photo Of My Cat?

And why do they want me to look at pictures of their cat, show me what they are eating for lunch, and insist I forward a religious or political message to others? 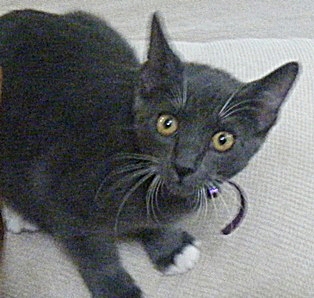 The Austin Lounge Lizards, a group I have followed for a number of years, wrote a song called “Old Blevins,” that tells the tale of a guy who retreated from a domestic squabble to a bar only to be trapped next to Old Blevins, an incoherent, non-stop yakker, a situation that is similar to what takes place electronically on Facebook daily.
Just like Facebook, Old Blevins grabbed the fellow’s attention and wouldn’t let go as the song relates:

If I was sitting next to Old Blevins at the Green Turtle, Dog Star, etc. and he pulled out photos of his cat, today’s lunch plate, a nephew, his long-dead parents, a recent trip to Upper Montclair, New Jersey, his girlfriend’s cleavage (No, wait, that’s ok), said a prayer, handed me a tofu recipe, and then asked me what kind of vegetable or dog I most represent it probably wouldn’t take me long to begin edging a few stools away from what I figure is a guy who has had a few too many or is an unhinged, narcissistic loon. And so would most of you.

If that’s the case then why do we sit and stare at exactly the same stuff on our cell phones, lap tops, iPads, etc. as this river of nonsense flows through Facebook to us from our “friends?”

And speaking of friends, I noticed the other day that I have almost 300 of these friends on my Facebook page. I have no idea how that happened as there are no more than five people who I would actually call friends, people who if I got arrested, would probably be in the cell next to me. But in order to communicate on the Internet in real time via Facebook with people you know, who have been introduced to you, or who requested that you “friend” them, you have to accept their request or reach out and ask them to be a “friend” and the numbers quickly add up. I scrolled through my list of almost 300 “friends” and discovered that there are many that I’ve never met, some I don’t recall, and others I’d just as soon forget. In other words these are not 300 who would fight to their death at Thermopylae on my behalf much less make bail for me.

Now I understand that folks who are entertainers, own a restaurant, a shop, or a tourist attraction, want to attract as many “friends” as possible, as it’s good for business. But why do I care about people that I have absolutely nothing in common with or are total strangers? And why do they want me to look at pictures of their cat, show me what they are eating for lunch, and insist I forward a religious or political message to others? If these people knocked on my front door with these same requests I’d find that disturbing and I’d probably call my neighbors to warn them after contacting the authorities.

And the darn thing can actually be vicious and dangerous as last week a 16-year-old student from Poinciana, a town just south of Orlando, was arrested on attempted murder charges after he stabbed a classmate over a Facebook posting.

So I’ve been rethinking this Facebook stuff and I’m considering going back to the old fashioned “face-to-face-have-a-cup-of-coffee-or-beer-conversation” and written forms of communication where no one has ever shown me a picture of their cat or attempted to stab me for my comments, no matter how disagreeable they think I may be or how silly my observations.

And if I do, it is more than likely that this final verse of the Lounge Lizards’ song will apply to me: