Washington and the Essence of Chaos

A recession is merely the result of a good time. Like a hangover after a party, a recession clears the path to responsibility...at least until the next party 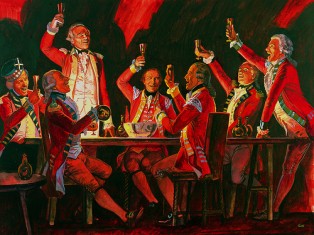 The Essence of Chaos is evolutionary progress

Even though I’m somewhat skeptical on the described Butterfly Effect realities, I’m always battling with the total impact of detail actions on a wider scale. So when my new found friend Shaun remarked a couple of days ago that reading my stories made him on occasion wonder how I would tie the ends together to make the entirety plausible, I answered that on our planet “everything is connected”. Even though this story is about economy and health care and financial regulation legislation, real estate and democracy and much more…..the connections are there, just not always in “your face”.

I’m not much for sticking my head in the sand when it comes to describing the economy and in particular the state of real estate.
I come over the Shave bridge onto this beautiful island and somewhere in the vicinity where there is an Ace store today, the same billboard that told me 2 years ago that there were 5 island lots available at $275K each, now shows a price of $85K per piece and still nothing seems to give. That’s  almost 70% deflation and I still see no buyers!
I talk to friends and clients and find confusion with the direction of the economy is widespread…so is a growing sense of desperation. I’m trying to tell people, this is not the Titanic going down with every soul perishing. (Actually even the Titanic had quite a few survivors, almost one third of the total number of passengers).
And if there is any comparison to be made between the Titanic and our current economical disaster, it could be the huge incompetence of those in charge.

The Titanic was outfitted with only 20 lifeboats, enough for 1,178 people or just half of the people aboard.
The Titanic floated in almost horizontal position for close to three hours, plenty of time therefor to fully load and lower all lifeboats to maximum capacity, yet many boats were lowered only half filled.
It is well known that the ship received information earlier regarding the presence of ice floes in the vicinity, yet continued to speed full throttle ahead towards tragedy.

Are you seeing the parallels between the Titanic’s demise and the state of the current economy?

Everything was so hurriedly put together without much consideration for solid management and responsible safety, that even the paint was still wet in some spots when the first passengers arrived for the ill-fated trip.
I’m not suggesting here that there is no ‘luck of the draw’ here, but I’m trying to convey that even in the worst of economies:

a. we need leadership that has the courage to do what may be unpopular, which means stop being political and start enacting policies

b. we need leadership that can get quickly to the bottom of the cause, analyze the elements that were detrimental and put programs in place that counterbalance the negative effects. And don’t forget, there are no instant miracle cures.

Let’s start by accepting that 9 out of 10 people still hold a job, even if it’s part time or under-employed. At least that way we get a bottomline picture where to start from. In my opinion the real overriding problem we are facing is the noisy interference of ideologists, left, right or clipped winged, who under the veil of policy indoctrinate politics, while ignoring the facts. If we would simply let “nature” take its course in many instances, things would be much less cluttered and chaotic and solutions much more visible.

Now don’t translate this into not making decisions and lazily wait for things to unfold. That is a recipe for disaster as well. Look at things from a helicopter overview and only step in when things go wrong.
Most instrumental technologies on earth are very precise mechanisms not be be interfered with. But if collective ignorance, partisan dogmas or financial interests elect the exception to the rule to be the direction to follow, than policies become ineffective and expensive band-aids for ever expanding diseases. And that’s what Washington does these days, it writes laws based on exceptions rather than supporting the healthy development of natural processes. It is the inevitable result of a long term culture that has ruled the capitOl or should I say capitAl.

Take the human body for example. If you treat it right it has an enormous self healing capacity. But if you run to the doctor with every pain that comes along, the ensuing prescriptions will kill the body’s power to heal itself.

The human body is designed to renew and perfect itself. It does this every second of every day, so long as we are living. If we don’t damage it too much and let it do what it wants to do, we can be healthy.
The same works for an economy. A recession is nothing more than a hangover from too much partying. And accept it, for a couple of years there we partied like it was the 11th commandment. So it’s only fair that we woke up with a bit of a headache. It won’t kill us. The sun will still come up tomorrow. A bit of a headache, a couple of days of leaving the booze alone, getting some fresh air and some healthy food and soon we’ll be back to normal.

It’s all the interference that kills the natural process.

Look what happens when we break a bone. Once it’s put back into position, the bone will heal itself. And when it does, the brand-new bone is stronger than the bone it replaced.
The body wants to renew itself — and will do so as long as it is allowed. This is pretty much the same story with the economy. It is normal for a recession or depression, that a majority of people experience a noticeable decrease in the ‘quality’ of life, but left to our build in creativity, we will soon find satisfying answers to that dilemma, whether it’s playing cards with the neighbors once a week instead of a restaurant dinner, or Petanque at the Rec Center on Saturday morning instead of yet another shopping trip to Towncenter in Jacksonville.

Of course just like the human body is designed with a life cycle in mind, so is the economy. Any economy has a life cycle that is pushed by ideology. If capitalism is the ideology than the free market mechanisms have to do the heavy lifting, not bailouts and subsidies. The system is designed that way. With Washington having dictated the band-aids, no mechanism is currently functioning the way it is supposed to. Instead of walking on our feet we are walking on our hands and see the world from a confusing and contradicting perspective.

To give you an example of how upside down this all looks, take the Health Care Bill in action:
• Florida has a severe shortage of nurses, a very high percentage of elderly citizens and a statewide hiring freeze, so if you are admitted to the hospital, you should have someone with you pretty much full time to help look after your interests, and that you and/or that person should ask a lot of questions about any procedures they want to do on you. My friends Kay and Ric can tell you a story or two about this phenomenon. It’s not that the nurses are particularly incompetent or don’t care about their patients. Rather it is that their case loads are so high that no human being can possibly do the work without making mistakes.

• So what happens when “free” healthcare kicks in and price is no longer a factor in accessing medical services? Well my advice is to stay out of hospitals altogether. In other words start living a healthier lifestyle right now. I started a couple of months ago and feel already like a million bucks. Quit smoking, eat healthier, buy a bicycle, moderate your alcohol intake, take a breather now and then, read a book. None of this is expensive, as a matter of fact you’ll save substantially, while everything around you gets better.

• Things are inevitably getting a lot worse as the hospitals and doctor’s offices are flooded with less discriminating medical consumers – after all, it’s free. But also, there are going to be less doctors as a factor of supply and demand.

That this is going to lead to a healthcare implosion as the existing quasi-government system, which is built around massive subsidies and mountains of regulation, is already on its knees, requiring hiring freezes that make hospitals a particularly dangerous environment. As the next wave of subsidies and regulations kick in, and the government redoubles its efforts to beat the medical profession into compliance while ramping up the spending of money it doesn’t have, the whole system is at risk of collapse.

• and besides…let’s face it, the true nature of the healthcare bill and the implications of all its various provisions are still yet to be discovered and I am particularly scared about how the legal lobby has managed to keep tort reform out of the final bill, arguably the only thing that might have helped reduce the cost of healthcare by reducing the huge number of procedures ordered by doctors practicing “defensive” medicine.

With health care nailed down and financial regulation through the pipeline, I am afraid we’re looking at the end of the life cycle called Capitalism in America, unless there is still a way to get government out of our lives.

As it is, there is something in the dark crevices of my mind in which “webs we weave”  rhymes with “practice to deceive”  and forms a dark tunnel connection to the new American Ideology: democracy is great, let’s share it only with the chosen few.
The next couple of years will be defining for our longer term future. We need to make wise decisions if we don’t want to go the route that is described in this Craigslist submission