Washington DC is resembling a movie franchise with dozen of sequels in the line up. 'Fiscal Cliff' has now sprouted the sequel 'Lifting the Debt Ceiling'. Enjoy the suspense and hair raising scenes. 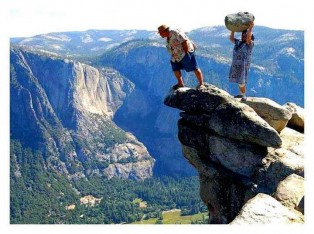 From Fiscal Cliff to Economic Abyss: A Joint Effort

If you want further proof how the Nation’s Capital is outbidding Hollywood for the term Tinseltown, look no further. The last minute Fiscal Cliff “deal” is all the proof you need.

Weeks of  crappy and mostly inaccurate “news” material about 2013 financial challenges were translated by Washington pundits from challenging to mysterious to horror and death and destruction and concluded into a shotgun wedding compromise between Joe Biden and Minority Leader Mitch McConnell on the Eve of Destruction. At least that’s what both parties would like you to believe: that the wedding was forced. Everyone can exit the theatre with a nervous smile of relief: disaster has been diverted.

Don’t be fooled. At no point should you even consider believing that the Republicrats and Demopublicans were going to let anything remotely looking like austerity prevail and actually clip their ability to spend like the drunken frat boys they are. They’re having way too much fun for that.

Washington has become a powerful and profitable movie franchise, much more attractive that any ‘Mission Impossible’, ‘Shreck’ or even ‘James Bond’ franchise. This is a franchise with numerous Box Office Hit sequels in the pipeline: The Mysterious Disappearance of Social Security, the Return of the Evil Empire, Body Snatchers have Invaded Medicare and so on. The fiscal cliff sequel is already being lined up by executive producer B. Obama, who projects Wars on Main Street when the next issue of Lifting the Debt Ceiling is going to be tackled. Maybe the Republicrats will finally dig in their heels, just like Gandalf did when meeting the Balrog Demon in Lord of the Rings, and, staff in hand, shout with firm intent, “YOU SHALL NOT PASS!”

But as real critics call the POTUS debt ceiling warning “predictable”, mainstream reporting happily goes along with another bout of deceptive massaging of the mass minds. Just like in Lord of the Rings, a scenario that demands and executes real action is pure fantasy. The finger of warning will once again poke at those socially irresponsibles, who are looking to attack entitlements and consequently the debt ceiling will lift as soon as opposition swoons.

When I caught a glimpse of above photograph somewhere on the internet, I had to wonder which party was looking from the Fiscal Cliff into the Abyss and which one was ready to drop the rock. I guess in the end it doesn’t really matter, because the majority of the population lives in movie-land anyway with a $16 cone of popcorn in one hand and a 32 oz Coke in another, waiting for the storyline to unfold.