My mother's recent encounter with a water moccasin prompted this reminder about the danger of this water snake. 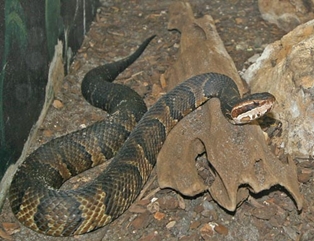 My mother’s recent encounter with a water moccasin prompted this reminder about the danger of this pit viper snake that lives in or near the water. The snake especially likes slow moving streams, shallow lakes and marshes. The moccasin will enter the sea and is a good swimmer, so Florida is a perfect home for this aggressive and poisonous reptile.

Mom lives along a canal fed by the St. John’s River in Putnam County, near Palatka, Florida. She was doing some minor chores on her patio while her landscaping maintenance company serviced her yard.

After watering her potted plants, she moved on to brush the leaves from the creases in the cushions of her three big wooden rocking chairs on the covered porch. She lifted the cushion with one hand and reached with the other to gently brush away the debris when she spotted a snake skin. It is not uncommon to find snake skins occasionally, so she shook the cushion instead of touching the snake skin with her bare hand and when she did a water moccasin fell out of the cushion.

It was small and very much alive. Now my mother absolutely hates snakes and she let out a blood curdling scream! The landscapers were just finishing up and they begrudgingly trotted back up the sloped yard and onto the porch where my mom’s Boston Terrorist, Sassy, was barking at the snake, successfully avoiding the snake’s attempted strikes.

Danny pinned the snake with a shovel, while the other landscaper, Curtis, returned to the truck to get a gas can. Mom was insistant that the snake not be killed on the porch, she wanted no trace of snake poison around. The gas Curtis poured on the snake just make it mad!

The neighbors dog, Daisey, joined in the action and Mom finally managed to get both dogs into her house while the men tried to decide how to kill the snake without shedding any blood.

Mom doesn’t know how they killed the snake, but they did and then tossed its carcass into the canal.

The point of Mom’s story is to be careful when you are outside. Snakes can hide in the tiniest of places, spiders, too! If you are bitten by a poisonous snake, call 9-1-1 immediately. The faster you receive medical treatment, the more likely you will have a successful recovery. In an article by Dong-Phuong Nguyen, Staff Writer for the St. Petersburg Times, Dr. Mariano Fiallos “estimated that, on average, children would have about an hour to get medical treatment.”

Though my mom is not a fan of snakes by any stretch of the imagination, we were raised to only kill the poisonous ones. She actually has a large black snake that lives under her shed. She says, “He is welcome here… he earns his keep.”