partying in the adirondacks

When the party ride starts, "a moment's notice" becomes a way of life up here in Upstate New York aka the Adirondacks. 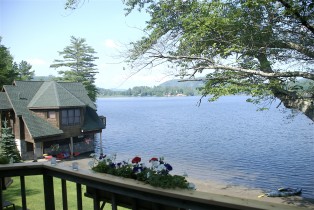 Several months ago during a trip to a St.Augustine Birthday Party, Bernie invited us to come up to his Lake House in the Adirondacks in June for a weekend of partying. Always leaving space for spontaneous decisions, especially if we like the people involved in the process, we said “we’d love to”.

Bernie is a “several times removed” member of the family we are friends with here in Florida and I think the family tree works like this: Bernie’s girlfriend Stacey is the sister or friend? of Jennifer, who is the daughter of the uncle of our friend Tracy.

Bernie is a “mountain” man, born and raised in the lower Adirondacks on Brant Lake where except for a two week stint in the Army Corps of engineers in Colorado, never moved anywhere else. At 53, Bernie knows everyone around the Lake and everyone knows him to the point that if you go to dinner at a restaurant, the “Hi Bernie” and handshakes literally never stop. Bernie is also a smart man, witnessed by the fact that he owns numerous beautiful tracts of land and homes around the lake. He figured early on that the beauty of Brant Lake would attract a lot of money from the New York- New Jersey Metro area, with the resulting demand for excavation and construction services. He became the “pointman” for homes around the lakes, making early contacts and keeping customers happy for the duration of their homes in the area. He is a man of few words and lots of action, works at least 6 if not 7 days a week at his excavation/ landscaping company and quarry from 6 am to whatever time it takes to get the job done. But Bernie is also a caring man to friends and family. He works hard and he plays hard and that’s how we learned about the concept of “partying non-stop” in the Adirondack Mountains.

The concept is simple: You have your myriad of water and land toys ready at a moment’s notice, you have your bars and refrigerators filled with everything you may possible need or want for food and beverages, you have coolers and grills ready and lit up at any time of the day or night, because when the ride starts, “a moment’s notice” becomes a way of life up here in Cold Country USA. 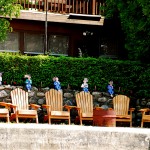 Famous Adirondack chairs lined up for the party 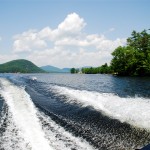 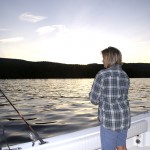 Fishing for Salmon, Trout and Bass in the Sunset

The Summer Season last from June through early September, when everyone gets back to preparing for another harsh winter that freezes the lakes completely.
A small town on Lake George called Bolton Landing has 700 inhabitants in the winter months and 30,000 during the short summer period, and everyone parties together for 90 days or so.

Our arrival party on Thursday night was kind of a planning session for the next 5 days of our stay, so I paid attention to the organizers and memorized as many faces to names and who belonged or was related to whom, as I could possibly remember during one party. A couple of days into the partying you give up on that because by now it seems that Upper Upstate New York, New Hampshire and Vermont are all related and everyone is friendly, talkative and extremely hospitable.

As a result of what resembled an honest approach to structure on the arrival party, I was looking forward to a somewhat organized line up of interesting places to see and dinners to enjoy. Lake Placid, Burlington, Ticonderoga, Saratoga and many other sites of interest were suggested. Well, I learned during the days that followed, that the arrival of the Cell Phone in these communities, has made any form of longterm planning a thing of the past, as this little machine facilitates instant changes of plans and what seems set in stone one moment, is completely abandoned a minute later for another plan, which, as the day goes on may be abandoned for plan 3 or 4; usually with better prospects. Interesting was that no-one in the roster of early planning ever became upset because of the changes. I also discovered that a 5 minute ride is never a 5 minute ride. A half hour is the true translation of 5 minutes, whether it concerns a restaurant or a shop to go to. 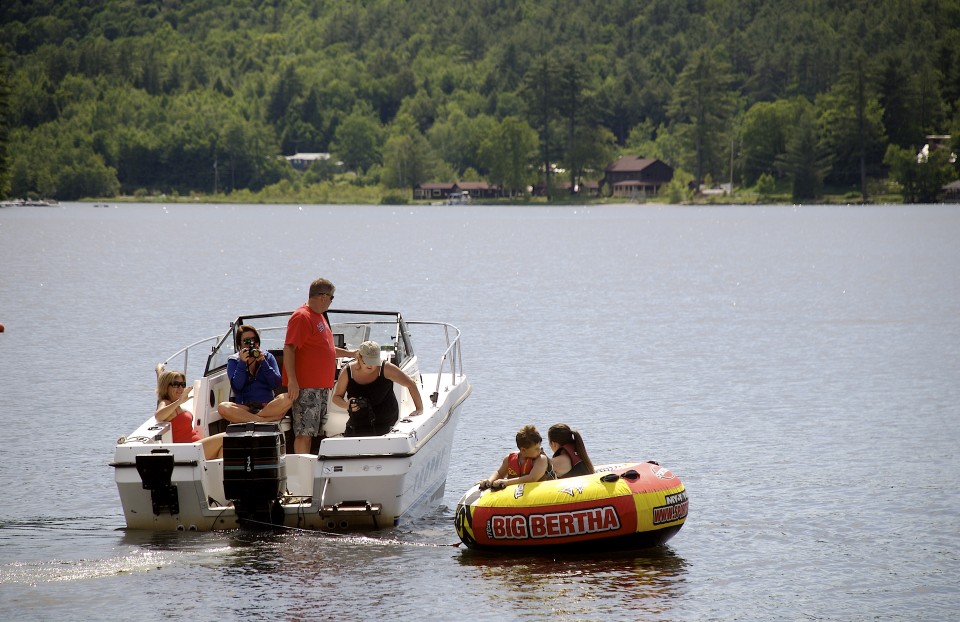 Our Weekend at Bernie’s was a blast that included a boatload of parties, sightseeings, night time fishing on Lake George, boating, tubing and kayaking on Brant Lake, visiting quaint Lake Communities and Historic ((indian) sites, conversations with locals and old timers and it turns out that there is a close connection between the Adirondacks and North Florida. Many locals up here, all tourism business owners, have over the years bought properties between Amelia Island and St.Augustine (Crescent Beach) to spend their winter months away from the cold and the madness of summertime vacationing.

Our weekend at Bernie’s was an eye opening blast. We’re taking off for New York City today, which by any standards must be quieter and more relaxed than Five Days in the Adirondacks, where the locals are just gearing up with a practice run for the summer.