What Ports are Open on Your PC? 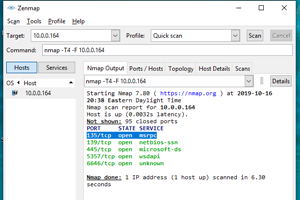 Another assignment in my IT Security class had me download Nmap, a scanner that tells me which ports are open on my computer, I’ve learned I have four. What does that mean? Well, in a nutshell, an open network port is like an open window. Applications on your computer use those windows to get in and out, or communicate with your computer, but an open port can also be a vulnerability for hackers to sneak through.

-Port 135 is a port that is used for Exchange clients like the Windows software that I use.
-Port 139, also open, is used for sharing files on my network. The firewall blocks incoming traffic on port 139 so the only file sharing is within my network.
-Port 445 is usually open by default with newer versions of Windows, but there was a known vulnerabililty here with The WannaCry ransomware exploit. Ransomware is where a hacker, also known as a threat actor, demands money in exchange for your computer files, which the hacker is holding hostage. This threat affected over 200,000 computers in 150 countries. Interestingly, it was a hacker who helped stop The WannaCry attack.
-Port 5357 is open. This port is open to permit me to use multiple printers on a shared local access network (LAN).
-Port 6646 is also open and the described reason is unknown, though I know my McAfee security uses that port.

Fortunately, none of my open ports raised a red flag, however, in IT security unnecessarily open ports can be a very real threat.