What to know about water and microwaves

Superheating water in a Microwave is possible, but requires near perfect conditions of carelessness mixed with stupidity. 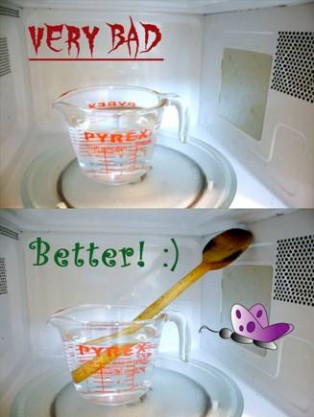 This story came from one of my brothers who relayed that someone in his neighborhood had the following very nasty experience with boiling water in his microwave.

He apparently wanted a cup of instant coffee, so he put water in a cup, placed it in the microwave and turned it on. Like we all do on numerous occasions.
He can’t exactly remember how he set the timer, but since he liked his coffee hot, it may have been well over 2 minutes. He wanted to see it boil. When the ringer went off, he opened the door, looked into the cup and didn’t see it boiling, yet right at that moment the water like a geyser exploded into his face.
Apparently the cup stayed in one piece until he dropped it, but the man suffered third degree burns when the entire content of the cup hit his face; and he may even have partly lost sight in one eye.
The surgeon in the hospital told his family that this apparently happens quite often and warned not to ever heat up water in a microwave, unless you  place a wooden stir (obviously not anything metal), or a tea bag in the water, to spread the heating energy.
An industry comment (General Electric) points out you should never heat a liquid longer than 2 minutes in the microwave, because it can easily reach a state of super heating, which does not show any signs of boiling on the surface until you move the cup or bowl, or put a spoon or teabag in it.

Advice is to use a water cooker or heating element and if you absolutely have to use the microwave, let the cup sit for another 30 seconds before opening the door.

After reading my brother’s story I decided to check out Snopes.com which confirmed the phenomenon. Actually I think whomever told my brother about it, got the story from snopes, and made it his own. A good source to check on true or false