When the Going Gets Tough, the Dutch Show Courage

Public-policy disasters are what you get when you apply rational, small-scale problem-solving logic to an inappropriately broad situation. 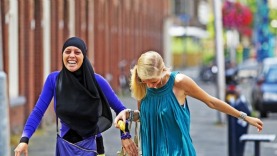 Integration is factual and real

My dearest old friend Ric, who six months ago moved from Amelia Island to Nashville sent me a Go Dutch story this morning with the request to offer my opinion. Rather than summarize the content of the email I would like to share it with you in its entirety and then offer my weighed opinion, however with one caveat; there is absolutely no comparison value available between the US immigration policies and the Dutch policies, because their political, cultural, religious and economic histories are utterly divergent.

Before I get into that however, here is the news story as it was sent into my inbox.

The Netherlands, where six per cent of the population is now Muslim, is scrapping multiculturalism.

The Dutch government says it will abandon the long-standing model of multiculturalism that has encouraged Muslim immigrants to create a parallel society within the Netherlands …    A new integration bill, which Dutch Interior Minister Piet Hein Donner presented to parliament,  on June 16, 2015 reads:   ”The government shares the social dissatisfaction over the multicultural society model and plans to shift priority to the values of the Dutch people.” In the new integration system, the values of the Dutch society, play a central role.    With this change, the government steps away from the model of a multicultural society.

The letter continues: “A more obligatory integration is justified because the government also demands that from its own citizens.” It is necessary because otherwise the society gradually grows apart and eventually no one feels at home anymore in the Netherlands.    The new integration policy will place more demands on immigrants.   For example, immigrants will be required to learn the Dutch language, and the government will take a tougher approach to immigrants who ignore Dutch values or disobey Dutch law.    The government will also stop offering special subsidies for Muslim immigrants because, according to Donner: “It is not the government’s job to integrate immigrants.”  (How bloody true!!!)    The government will introduce new legislation that outlaws forced marriages and will also impose tougher measures against Muslim immigrants who lower their chances of employment by the way they dress.

More specifically, the government imposed a ban on face-covering, Islamic burqas as of January 1, 2015.    Holland has done that whole liberal thing, and realized – maybe too late – that creating a nation of tribes, will kill the nation itself.    The future of Australia, the UK, USA, Canada and New Zealand may well be read here..

READERS NOTE: Muslim immigrants leave their countries of birth because of civil and political unrest . . . “CREATED BY THE VERY NATURE OF THEIR CULTURE.” Countries like Holland, Canada, USA, UK, Australia and New Zealand have an established way of life that actually works, so why embrace the unworkable? If Muslims do not wish to accept another culture, the answer is  simple; “STAY WHERE YOU ARE!!!”
This gives a whole new meaning to the term, ‘Dutch Courage’ … Unfortunately Australian, UK, USA, Canadian and New Zealand politicians don’t have the .. guts to do the same.  There’s a whole lot of truth here!!!

End of email followed by a cryptic:
Han, what are your thoughts on this? R

Well where to start unravelling this ‘Ode to the Dutch Courage’.

First: This whole integration debate started back in 2011, so whomever added the June 16, 2015 date to the story is intentionally distorting a number of timeline facts. Also, contrary to what’s claimed, the values of the Dutch society have always played a central role in immigration integration policy, primarily because the Dutch Society has been a multicultural society since the 16th century, when it was the world’s leading trader. Because of its tolerance in many aspects of life, the country since has attracted numerous political and religious refugees, but also large numbers of prosperous traders and immigrants who moved or fled to the Netherlands over the centuries.

Second: The Muslim population in the Netherlands has traditionally hovered around 4-5% of the total population, especially since after World War II, many Moroccans and Turks came to work the heavy industries such as coal mines and steel works in search for a better life. They were always integrated into a Salad Bowl Concept that supported economic progress.

Get a real impression of origins of the 11% of the alien “Dutch” population from this map.

To open above dissertation with a sensationalist quote that implies that now because 6% of the Dutch population pays homage and tribute to Allah (it’s less than 5%, but who counts), the Dutch government decides to scrap multiculturalism from the societal palette, is a typical Fox News way of painting the canvas.

The reality is that islamic presence in Holland has for many decades been around the same percentage. Another reality not reflected in the sensationalist statement is that the Netherlands is probably the most progressive country on earth when it comes to gay rights, abortion, euthanasia (human life in general), legalized drugs, female equality and economic equality. And during the development of these human concepts, the country created economic support and cultural survival systems that need protection against abuse. No matter what a religion may preach about gays or the sin of euthanasia, you better be accepting of the concept if you want to move to the Netherlands.

So I would like to say that whomever presented this 4 year old story, should have spent a couple more hours researching what has happened since the summer of 2011. He/she would have found a much more tapered and careful introduction of melting Pot conceptuality with much consideration and respect for the parties involved.

Third: The voluntary immigration integration concepts around the world for centuries have been moving from a Melting Pot structure to a Salad Bowl structure and concepts in between.  When it comes to the integration of multicultural societies, intent is of major importance. Voluntary emigration/immigration carries the inclination that you are actually excited to accept the consequences of moving to an elected society and are expected to adjust to and adopt your new country’s kaleidoscope of lifestyle offerings. After a number of years living in that society, a natural progression usually takes place and over time you master the language, understand the economic, political and social systems, and you melt into the pot, which will become your childrens’ new national foundation.

The Dutch, always on the front lines to try something new, tried the 20th century philosophy inherent to the Melting Pot concept first, in the believe that in a framework of mutual respect, time’s slow simmering would supposedly integrate all of them. Well that’s not quite the case if you don’t control the floodgate. While countries like America, Canada and Australia saw the development of China Towns, Little Italys, Little Havanas, little Polands and German villages all over the place, each with their own distinct characteristics, power structures and increasingly limited respect for the laws of the land, the Dutch faced large scale cultural diversity in its small town industrial neighborhoods. It was much more an in-your-face experience for native dutch people.

I grew up in a coal miners’ town in a wedge of industrial land between Germany and Belgium and every 3rd or 4th person in our small town society was either/or from a different country, religion, economic classification, creed or race. Respect was the first effort, patience the second, the third one was friendliness and the fourth one empathy. We mostly got along fine.
Another childhood memory was the one where we played ball with our friends in Germany across the barbed wire in the middle of the road that was the border between the two countries, less than 10 years after WWII ended. A smile, a wave and a friendly word went a very long way.

For everyone jumping to conclusions based on above dissertation, it’s important to realize that the Netherlands is a very small country (1/4 the size of Florida) but with a relatively large population of almost 17 million people and a history anchored in global trading, economic diversity, religious freedom and a highly educated population that rarely cuts off the power of communication.

Conclusion: several decades ago the Dutch decided to give the Salad Bowl Concept to the multicultural integration process a whirl and over time found that it wasn’t working too well either. So now it is back to the drawing board and instead of broad, magnificent gestures of stupidity to impress, the emphasis is on small workable solutions.

Fourth: To make a long story not much longer, this dissertation is 4 years old; it’s a work in progress; some Dutch support the melting pot concept, some support the Salad Bowl and some support elements from either one and reject other elements. Yet very few Dutchmen support the crude idea that anyone who doesn’t agree with the Laws of the Land should fuck off and go back to where they came from or call Muslims Camel Jockies or other atrocious, indignant expressions of life’s dark corners. It’s a general understanding that if all the almost 2 billion Muslims on earth would be members of Isis, humanity would already have ceased to exist. Keep that in mind. That’s how the second largest Dutch city of Rotterdam elected a muslim Mayor seven years ago, a man widely admired for his vision and leadership towards a future where discussions about Immigrant Integration will be a thing of the past.

Comparing the challenges the Dutch government is undertaking and the so-called courage to re-introduce Melting Pot elements, with the challenges here in America are slightly idiotic considering that the Dutch understood Islam long before North America had states with borders or Napoleon sold Spanish and Indian lands to Thomas Jefferson. Why? Because public-policy disasters are what you get when you apply rational, small-scale problem-solving logic to an inappropriately broad situation. Everything in America is too big to fail, which is why it often fails.