Where to Find Pirates at the 2014 Shrimp Festival

Shrimp Festival brings forth dozens of playfully entertaining pirates - who just may be your neighbors! 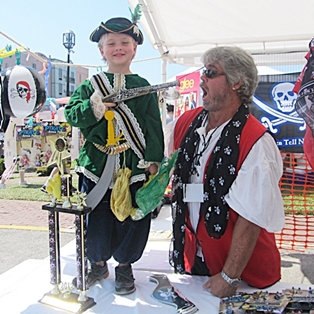 Thursday May 1st, the weekend kicks off with a Pirate Parade that begins at 6:00 pm and runs through the heart of historic, Fernandina Beach. Floats, bands and walking entries will put on their best wench and pirate costumes to compete for the Pirate Parade Awards. As a finale to this parade, scores of Fernandina Pirates Club, Inc, members and their Swabbies (pirates in training) will take to the streets with their large pirate ship float, Amelia’s Revenge. Black powdered pistols, rifles and cannons onboard the ship are lit igniting the imagined chaos of the town being taken over by Pirates!

Friday evening the waterfront area of the Festival opens at 6:00 PM with live music, opening ceremonies, the parade awards and the crowning of the 2014 Miss Shrimp Festival. In the midst of the excitement is a Pirate Booth offering swords, hooks, pirate hats, patches, flags and more. 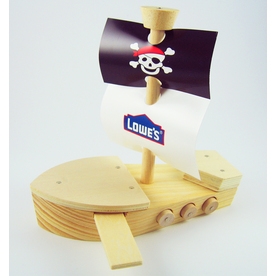 This year children are invited to build a pirate ship with a functioning “plank” and sails, thanks to the generous folks from Lowe’s Home Improvement Stores. But, soon after, as cannon fire and screams ring out in the night, the Pirates invade the town and take over the stage and subject the citizens to an amazing history lesson about their brethren. Then the much anticipated fireworks are shot overhead, lighting up the sky over the Amelia River followed by dancing in the streets to the amazing sounds of KTG until 10:30 PM.

Saturday morning the pirates can be found roaming the streets and in their booth as early as 9:00 am.

At 10:00 am, look for Pirates in the Kids Fun Zone for the Pirates in Training Contest (ages 5 and under) and the Little Pirate Contest (ages 6 and over), sponsored by Ann Teague Bonding Agency, Inc. 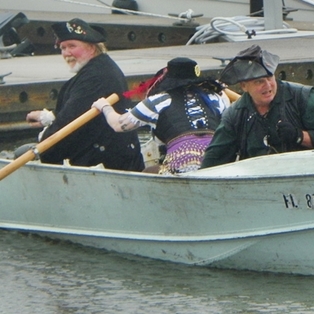 There will be an Invasion of the Pirates at noon, where they march through the streets from the waterfront to the courthouse and raise a Pirate Flag over Amelia Island.

The Best Dressed Adult Pirate Contest is G-Rated and open to anyone who dares enter. Sponsored by SearchAmelia.com, this fun and lively contest takes place near the waterfront at 12:30 pm where Pirates shine up their buckles and compete for cash prizes. This year, our guest judge will be Captain Edgar Hansen of the F/V Northwestern as featured on Discovery Channel’s #1 ranked show, Deadliest Catch

“Learn to be a Pirate”, a class for children led by members of the Fernandina Pirates Club, takes place at 3:30 pm in the Kids Fun Zone. Then they will pillage and plunder their way back through the streets to the waterfront stage to listen to platinum selling artist, Edwin McCain. The festivities of the Shrimp Festival end at 6:00 pm.

The action starts over again Sunday, at 10:00 am with Pirates in their booth trading their wares from around the world, mostly China, and nurse their wounds from the previous two battles. Now that the Island has been seized and is under control of the Pirates, they are free to roam the streets and frolic with the guests of the Festival. Pirates will be found witnessing the Blessing of the Fleet, and enjoying the Decorated Boat Parade on the Amelia River, and at 2:30 pm you’ll find many of them dancing to the Party Band of the South, The Swingin’ Medallions.

If you still haven’t attended “Learn to be a Pirate”, class will be in session two times on Sunday – at noon, and again at 3:30 pm. 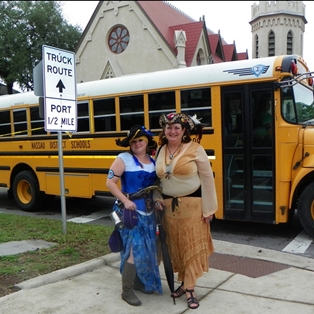 If you take advantage of the Park and Ride shuttle system, Pirates can often be found at the bus loading and unloading zone within the festival; uncharacteristically offering to help you manage your packages, boxes, handbags, cameras, and wallets – while you board the bus.

You don’t want to miss the seeing the Fernandina Pirates at the Isle of Eight Flags Shrimp Festival! Come partake of the shrimp, have some fun, enjoy the arts, crafts, and antiques, and dozens of playfully entertaining pirates!

Because many people enjoy coming to the Shrimp Festival dressed as pirates, please keep in mind that not all pirates are members of the Fernandina Pirates Club, Inc. The original, local Fernandina Pirates Club have been incorporated since the early 1970s. Pirate Club members are all volunteers and they each wear an identifying patch on their clothing. The Pirates Club is also an insured, not-for-profit organization in which both the City of Fernandina Beach and the Nassau County Commissioners have proclaimed as Goodwill Ambassadors to our Northeast Florida community.

There is NO admission fee to attend!