Tourism and entertainment are natural twins. They feed of each other and offer fun and happy memories in a time, increasingly influenced by government promoted anxiety. 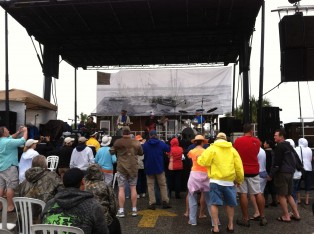 It seems that some eager beaver with personality issues and a complete lack of tourism understanding has managed to wiggle the topic of street performing in downtown Fernandina Beach on the City’s agenda for this coming Tuesday.

We all remember the Felix issue several years ago that got most of the town up in arms and I certainly hope that this issue will get the same response. Music and street performing is an essential part of the tourism attraction and the more spontaneous, the better. Anyone with a stake in the hospitality industry all over the world knows this, yet, Fernandina Beach instead of encouraging talented street performers to come out, is apparently in the process of passing an ordinance that will forbid any and all street performance on Centre Street and in the downtown business district other than for “special events”.

So who complained about street performers and wanted to have the topic put on the City’s Agenda? The Downtown Merchants or Businesses? Bars or Restaurants? A handful of Residents or maybe the tourists? Someone must have a beef with the issue to have this put on the Commission Agenda. And that someone (plural no doubt) needs to be brought forward and charged with treason against tourism or at least unmitigated stupidity. Tourism and entertainment are natural twins. They feed of each other and offer leisure times and happy memories in a life that is becoming increasingly controlled by government promoted anxiety. Street performers are by definition friendly, outgoing ambassadors for a tourism destination. They come out with their instruments and talents to enchant or test their skills on a relaxed audience and add ambiance to the experience that a tourism destination should be.

Instead of becoming an issue in someone’s blurred vision, street performers should be treated with grateful appreciation for what they add to the downtown experience.

So once again this either smells like just more legislation for the sake of government control imposed or….. and this maybe the catch!!!!… another attempted source of city income by requiring local performers to purchase a liability insurance policy for $300,000 and $350/yr permit so that they can play in other city parks but not in the downtown area.

Well I’m just a part time musician these days who would love to take some good musician friends on a summer evening and do a set of oldies or speak easies on a corner in Downtown, just for the fun it. Would I pay the city $350 for a license to be able to do this? Not in 350 years! A $300,000 liability insurance? Someone clearly misses the point here. It seems that someone has a bit too much time on their hands to come up with this insanity. At least that’s my opinion.

We (Island Vibe) played in the Pirate’s Parade Saturday a week ago to promote Sounds on Centre. The Street lined spectators loved it. We had fun. No money exchanged hands. It was a gift exchange. As street performers we gave our talent and practice and the audience gave back love and gratitude. We understood eachother.

Last Saturday when the gail force winds and pelting rain had kept us in close quarters for more than 4 days, I got a text that Pablo Cruise was going to go ahead with their show on the Shrimpfest stage. Now this is a band with a 40 year hits record. Their performance fee was no doubt covered by bad weather insurance and they could have cancelled their show by reason of safety; electric power and water don’t mix well, especially when you close an electrical circuit between guitar strings and a microphone, standing in a puddle of water. They didn’t. They went on stage and they played an awe inspiring show with great music for the hundred and fifty or so of us who were energized by the pure ambiance of live music in a beautiful waterfront setting.

Completely soaked at the end of the concert, my wife and I walked back through an almost empty Centre Street as we saw Felix sitting on his trike near the Pocket Park with a couple of pineapples in the back of his tricycle, playing the harmonica to the rhythm of the rain. Pure magic. We bought a pineapple, which I used as as quasi umbrella, while we giddily negotiated the puddles on our way back to the Atlantic Ave parking area. Downtown and music go hand in hand and make it magical.

Don’t loose it.
Tell you commissioners to encourage street performances instead of curtailing them through useless legislation.
Here is how you can let them know:
Arlene Filkoff: 583-8629; email:afilkoff@fbfl.orgCharlie Corbett: 583-1767; email: ccorbett@fbfl.orgSarah Pelican: 432-8644; email: spelican@fbfl.orgPat Gass: 277-7987; email: pgass@fbfl.orgEd Boner: 556-7554; email: eboner@fbfl.org