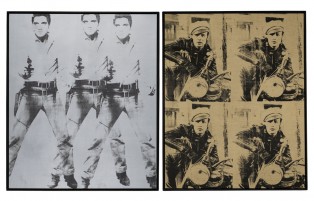 Signs that global warning is real are revealed by the top vineyards of the world. Signs that another financial crash is imminent are particularly revealing in the art world. And no…I’m not going to expand on potential telltale conclusions of what’s happening in Ferguson, Missouri after last night’s Grand Jury decision. Even as I’m writing these observations of impending doom, I now know that today’s harsh news is tomorrow’s defiance. Austrian school economists can clarify perfectly why we’re financially doomed and Keynesian economists with Nobel Prize Awards will contradict that picture by giving more credit to happy spending consumers – Money for nothing and chicks for free! Just ride the roller coaster of life.

Important wine producers all over the world are looking into the longterm of their business and conclude that climate change may force them to relocate their vineyards 200 to 300 miles north or south of the current locations, depending on northern and southern hemisphere. Wine grapes, especially the fine ones, are finicky when it comes to heat, cold and rain. It has to be perfect, to create a great wine and the current locations around the globe see big problems in the next 20-30 years. Traditional vineyards are increasingly experiencing problems and big producers are buying vineyards in new climate zones. The Brown Brothers, one of the oldest and largest wine producers in Australia bought a vineyard 300 miles to the south of their current one on the island of Tasmania, because their current locations in Victoria are increasingly experiencing summer temperatures above 100°F. Argentinian and South African producers are also looking for alternative locations, while Oregon is becoming a more attractive alternative for California wineries. The 3 big ones in the the wine business, France, Italy and Spain are looking inside their own borders to move certain grapes such as Merlot, Shiraz, Pinot and others to test climate change impact. The Merlot grape might be doing better in the Normandy in twenty years, than in its current Bordeaux region. Agricultural production of various sorts is eying the wine industry as the proverbial Canary in the coal mine to gauge their future.

Predicting the timing of a financial crash has become almost impossible since currencies have abandoned the gold standard in 1971, allowing central banks around the world to print money at their politically inspired whim, but there are telltales of excessive behavior, that can quite accurately gauge when a crash is imminent.
Contemporary art collection is one of those telltales. Collectors are insatiable and bordering on insane. Christie’s International in New York made auction once again history last week when it sold $853 million of contemporary art in two and a half hours. Christie’s beat its own $745 million record from last May , which in turn had beaten the $691 million record from last November. The Curve of Insanity continues as insiders obviously call it a very strong market.
To watch insanity unfold as people with too much money bid on crap for the sake of putting their excess money somewhere is almost criminal, but it also shows that we maybe getting closer to the edge of a reset.

Imagine Andy Warhol’s 7 foot silkscreen of a triple Elvis in a cowboy outfit (see Picture) fetching $81.9 million dollars and his “Four Marlons” (Brando) bringing in another $69.6 million and you know deep down inside that you’re looking at exploding insanity far beyond the decapitation of Louis XV in the French revolution. It’s almost like currency inflation stepping on a landmine ahead of the societal breakdown.

The auction house also reset records for artists like Ed Ruscha, Peter Doig, Georg Baselitz, Cindy Sherman and Cy Twombly. This last one completely escapes the realm of my sanity as his untitled, lasso-like cursived scribbles atop a blackboard-gray canvas sold for $70 million. Yes $70 million!!! And the winning bid came from Europe.

As always I try to find sanity in something, anything that at first seems unworldly, ungodly. So I research and found this essay on Cy Twombley the artist. After reading it I would understand a $10 million dollar bid in a competitive show off environment, but the other $60 million would still be senseless INFLATION in capitals. Let me know what you think, if anything.

So who were the bidders? American hedge-fund managers, bankers and broker/traders, European energy tycoons and bankers and Asian internet entrepreneurs raised their paddles for almost everything on the auction block as invited guests of lesser means let out gasps of disbelief. Yup the Federal Reserves of the World’s insane monetary expansion has surely ended up in the hands of those who needed it most.