My 89 year old Grandma is at it again, sending her wisdom conveniently to my in-box right here on Amelia Island. This is short, sweet and inspiring! 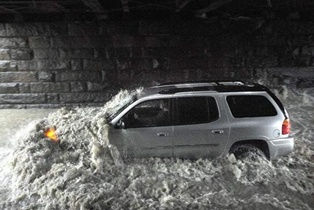 My 89 year old Grandma is at it again, sending her wisdom conveniently to my in-box right here on Amelia Island. This is short, sweet and inspiring!

One day a young lady was driving along with her father. They came upon a storm. The young lady asked her father what should she do, he said “Keep driving”. Cars began to pull over to the side, the storm was getting worse.
‚ÄúWhat should I do?‚Äù The young lady asked.
“Keep driving” her father replied.
On up a few feet she noticed eighteen wheelers were pulling over also. She told her dad, ‚ÄúI must pull over I can barely see ahead. It is terrible out here everyone is pulling over.‚Äù Her father told her not to give up, just keep driving. Now the storm was terrible but she never stopped driving and soon she could see a little clearer. After a couple of miles she was on dry land and the sun was out.
Her father said, ‚ÄúNow pull over and get out.‚Äù
“But why now?” She asked.
He said “Get out look back at all the people that gave up and is still in the storm. You never gave up and now your storm is over.‚Äù