World Cup Soccer Game Day 5 - Brazil had some scary moments. New Zealand got their first point in the Worldcup, Ivory Coast and Portugal split the points and Brazil was made to work hard for their win against North Korea. 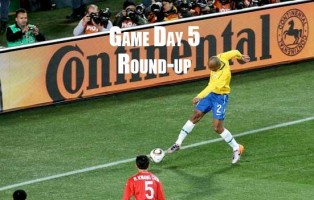 Impossible angle but it was Brazil's first goal against North Korea

New Zealand got their first point in the Worldcup, Ivory Coast and Portugal split the points and Brazil was made to work hard for their win against North Korea.

New Zealand did the impossible. In overtime and really in the dying moments of the game it scored the equalizer against high favorite Slovakia. A historic day for New Zealand soccer getting their first ever point in a World Cup.

In the opening minutes of the Game New Zealand shrug off their “Underdog” status by twice dangerously getting close to an opening goal. This shook up the Slovakians that the game against the “All Whites” would not be a walk-over and the European team went into a relentless search for the opening goal. Reward came 5 min. into the second half with a Vittek powered header into the bottom corner of the net. Rather than sit back, the team in Blue went on to press their advantage and several good chances just missed the target. Deep in injury time the Kiwi’s through Reid in stealth mode nodded home a dramatic equalizer

Group F is equally balanced on all levels as if they were put back in a time warp before yesterday’s 1-1 between Italy and Paraguay.

If one team deserved a win today it would have been Ivory Coast. In the first half the game was as equal as it could have been and the forward powers of both teams seemed to be matched with their opponents defenses.

If the two teams were engaged in a trench warfare in the first half, the second half burst into life early on with Ivory Coast doing most of the clean passing. Half chances came in fast and furious on both sides with Portugal losing the battle in mid field to the Côte d’Ivoire team and the introduction of Didier Drogba in the 66th minute threatened to even put a higher pressure on the Portuguese. But the downpour started and the match lost some steam. In the final minutes Ivory Coast Drogba had the best chance but hooked his through ball off target.

Overall, The Ivory Coast team together with the Germans seemed to have best controlled the weird behavior of the “flying ball”.

Brazil, the towering favorite in this Worldcup event had to actually work their butts off against absolute underdog North Korea (Brazil top ranked in Fifa standings while North Korea holds position 105).

The Koreans did not have much to bring into the first half game however the Brazilians could not find their way to the net. The Koreans reached the World Cup without a single win but conceded only 7 goals in their 14 qualifying matches, and the Brazilians had the same problem with the sturdy Korean defense.  Only some long distance shots made it halfway to the goals but nothing below the crossbar.

In the second half Brazil played deeper and finally some openings where created in the Korean defense and 10 minutes into the second half Maicon in an almost impossible angle surprised the Korean Goal Keeper. The goal opened the game and the Koreans were forced into the attack if they were to take home at least one point. The game seemed over when Elano comfortably finished a cross from Robinho that check mated the Korean Defense. It looked like the Brazilians were going in for the kill, but with one minute remaining Ji Yun-Nam burst into the penalty area and drove a memorable strike past Julio Cesar.

Some shaky overtime minutes for the Brazilians remained but in the end they brought home a hard fought win (2-1).