What makes someone fall in love playing a 5 ton instrument that usually houses in clock towers? 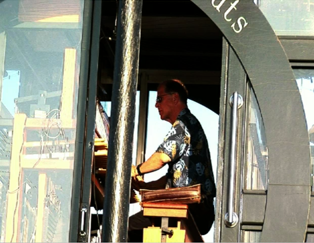 On a roadtrip from Naples Florida to Yale University, Petanque America owner Philippe Boets managed to get the Mobile Millennium Carillon to detour off I-95 for a memorable concert on Historic Fernandina’s Waterfront last week. Playing the massive 26 ton instrument was accomplished chief Carillonneur of the University of Chicago’s Rockefeller Chapel, Wylie Crawford.

Wylie fell in love with the carillon in 1967 while attending the university, when he discovered that actually playing the centuries’ old instrument that found its origins in the low countries Holland and Belgium, pretty much resembled the piano, even though “dancing” the foot keys made it almost an aerobic exercise. He learned to play the instrument by just practicing on the basement keyboard at the chapel. By 1974 he was considered advanced to become the assistant carillonneur and by 1984 he became Chief Carillonneur, a job he has held ever since.
Risen from self-taught hobbyist to chief carillonneur of the University, vice president of the American Guild of Carillonneurs, and now president of the World Carillon Federation—only the second North American in history to hold that title, Wylie treated the large Fernandina Beach crowd not only to a beautiful selection of contemporary and classic tunes, he also explained much of the origins of this impressive instrument with 48 bells and chimes.

The carillon is an instrument, usually designed to be built into a bell tower, that originated about 500 years ago in the Low Countries of Europe… the Netherlands, Belgium and northern France. It consists of fixed bells that are struck by clappers, mechanically connected to keys which you strike with loosely closed fists—you don’t want to clench—and pedals which you stomp on. Since it’s all mechanical—there’s no electricity involved—you can vary the tone by varying the force you apply to the keys.
There are about 600 carillons worldwide with a respectable 170 in North America with a strong concentration around Chicago and Philadelphia.

I found the following part of an interview with Wylie done a couple of years ago by the Maroon, which gives a deeper insight into the man and his instrument. Here it is:

CM: How does one become a carillonneur? How did you become a carillonneur?
WC: Well there are very few full-time carillon positions in this country, and no schools for the carillon. No, that’s not true—some colleges are just beginning to allow students to major in carillon performance. Otherwise, you have to learn from another carillonneur.
In the 1960s I was working on an M.A.T. [Master of Arts in Teaching degree] in Physics Education here. I happened to be walking past Rockefeller Chapel one night, when I heard the strangest noises. It turns out that then-University Carillonneur Daniel Robins was quite fond of putting on these over-the-top spectacles. In this instance, I found the bell tower playing along with a mobile carillon that was mounted on a truck, a compressed-air calliope and rows of tubas that were blasting Wagner. I ran home to get my tape recorder and afterwards I was determined to meet the man responsible. I knew I wanted to learn as soon as I first saw him play, but he wasn’t particularly interested in taking on students. He gave me some sheet music and a key to the practice carillon in the basement, though, and I began to teach myself.

CM: Had you had previous musical experience?
WC: I had had piano lessons and I sang in chorus. Also, as an undergraduate I had been manager of my college radio station.

CM: How did you get from the basement to the bell tower?
WC: Apparently [Daniel Robins, the previous carillonneur] had heard me practicing. He called me late one Saturday and said, “I’ve had one heck of a great night, but I’m not gonna be able to play for services tomorrow morning.” Needless to say, I didn’t get much sleep that night!

CM: Now that you’re a seasoned Chief Carillonneur of 22 years, what are some highlights of your repertoire?
WC: The Gymnopédies of Erik Satie, the Alma Mater, something called the University of Chicago Suite, Auprès de ma Blonde, Greensleeves, the Godfather Theme, Simple Gifts, the Beatles’ Yesterday, the Teddy Bears’ Picnic, Send in the Clowns.

CM: Do you transpose your own music? Do you write your own music?
WC: As a carillonneur, you kind of have to transpose for yourself, since so little is written for it. Actually, being a musician is only a small part of being a carillonneur. You need to be a PR person, an educator and a fundraiser as well. As for writing music, I don’t know what to say. It’s a fantasy. But I don’t have the confidence.

CM: So did you ever get that M.A.T. in Physics Education?
WC: Yes, although I don’t actually use it. Just as I discovered the carillon, I discovered an early computer in the basement of a building on campus, and I was similarly transfixed. I ended up founding a computing company that was among the first to develop networking capabilities for PCs, something few others were looking at back then.
In 1989 I was named one of the 25 most influential people in the computer industry, along with Bill Gates. (I still have that plaque on my wall at home.) I ended up with about 100 employees, but I recently sold that company and now run a much smaller computer consulting operation.

CM: Do you see a common theme between the carillon and the computer?
WC: Sure. People are always pointing out that musicians and mathematicians are alike. Music is based on numbers.

CM: Now the obligatory: What do you do when you’re not working?
WC: Well, I actually met my wife at the Evanston International Dance Group. I find that folk music, especially Balkan, has extremely exciting rhythms and harmonies. So I go to folk dances. I also spend my winters in Sarasota Florida now.

CM: What would you say if I asked you to play “Freebird” right now?
WC: What’s “Freebird?”

Remarkable that a Chicago based interview mentions Lynyrd Skynyrd’s ‘Freebird’ as a topic for a carillon performance, but down here on Amelia Island, Wylie would have received another standing ovation, if it would have been part of his repertoire.