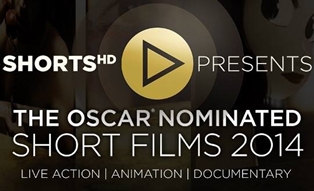 Looking for a special way to spend your Valentine’s weekend? You’ll fall in love with the films nominated for Best Animated, Best Live Action and Best Documentary short films, shown in four alternating groups of films at the theatre, located at 1014 Beech Street.

The Academy of Motion Picture Arts and Sciences defines a short film as an original motion picture that has a running time of 40 minutes or less, including all credits. This year’s nominees, presented by ShortsHD working with Magnolia Pictures, will be hosted by past Oscar winners and a slew of renowned filmmakers who have made their mark in short films.

For the Documentary Shorts, the hosts include: Lucy Walker (Waste Land), Sean Fine and Andrea Nix Fine, Eva Orner (Taxi to the Dark Side) Peter Webber and Shawn Christensen. The Animated Shorts will be hosted by one of the high-diving giraffes of YouTube fame and his ostrich buddy in this special commission by Paris-based Cube Creative and Nicolas Deveaux.

“Every year, festival-goers come out of the screenings saying the shorts are some of the best films they’ve seen all year,” said FLT Managing Artistic Director Kate Hart. “We’ve got some jewels again this year; people are in for a treat!” The screenings at FLT will include an opportunity for film-goers to pick the films they think will win the Oscar in all three categories. Those who correctly pick the three short films which win Oscars on March 2 will be entered into a drawing to win two tickets to an upcoming production at the theatre, now celebrating its 22nd season.

Admission to each individual screening session is $10.00; an Early Bird screening pass good for the first two screenings on both Saturday and Sunday, a total of four film sessions is $30.00. Tickets are available at The UPS Store in the Fernandina Beach Publix shopping center on Sadler Road.

Fernandina Little Theatre is an intimate space, and patrons are encouraged to purchase tickets in advance to guarantee seating availability. For more information about the festival, visit www.ameliaflt.org.