The Lotus-Ford owned by The Henry Ford, will be on display one day only, March 13, at the 2011 Amelia Island Concours d'Elegance. 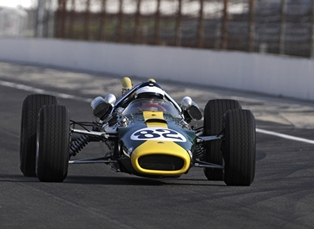 Dearborn, MI – The recently conserved Lotus-Ford 38/1, owned by The Henry Ford in Dearborn, Michigan, will be on display one day only, Sunday March 13, at the 2011 Amelia Island Concours d’Elegance, Amelia Island, Florida. Bob Casey, automobile historian and curator of transportation at The Henry Ford, will be at the event and serving as one of the concours judges.

The Lotus-Ford is one of the most significant vehicles in American racing history. In 1965, Scottish-born Formula One star Jimmy Clark drove the car to victory in the Indianapolis 500. This was the first win by a rear-engine car in the 500, marking the end of the front-engine roadster’s era. It also was the first Indy 500 victory for a Ford-powered car. It changed the course of Indy car racing, with the application of rear-engine, European Formula 1 technology, a lightweight, aircraft-inspired Lotus chassis, four-wheel independent suspension, and a powerful, rear-mounted DOHC Ford V8 engine.

After the 1965 victory ceremonies, the car went on a promotional tour around the country, left just as it was when it was pushed out of the winner’s circle. It was acquired by The Henry Ford in 1977. The engine never ran again until 2010.

In 2009 the car was displayed at the Goodwood Festival of Speed in England. There, The Henry Ford, working with Classic Team Lotus and Clive Chapman, son of Lotus founder Colin Chapman, decided to completely conserve the car to running condition.

During that process, the engine was removed and the oil drained for the first time since 1965. The engine was shipped to Indianapolis, where it was conserved by Walt Goodwin of Race Car Restorations, Inc.

At the 2010 Goodwood Festival, the Lotus-Ford was driven for the first time since 1965 by a Jim Clark contemporary and friend, three-time Formula One champion Sir Jackie Stewart. Later in the year it returned for the first time to Indianapolis Motor Speedway, where it was driven on the historic track by current Scottish racing star Dario Franchitti, the 2010 Indy Car champion and two-time Indy 500 winner.

The Lotus-Ford will be a key component in Racing in America, new, permanent exhibition planned for Henry Ford Museum. Racing in America will cover the history and innovation of American auto racing in an engaging, unique experience powered by highly interactive displays and frontier-stretching technologies. It will bring auto racing to life with the greatest and most significant historical vehicles, the personal stories and collections from the most legendary leaders and drivers, and with on-site demonstrations of today’s technological advancements.