If you missed attending the 47th Shrimp Festival, here are the video highlights in less than six minutes. 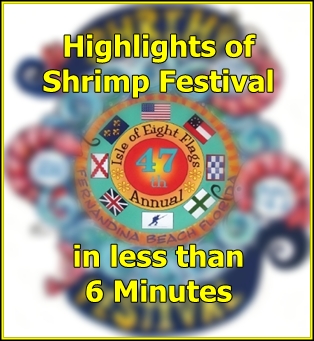 In Fernandina Beach, Florida, the 2010 Isle of Eight Flags Shrimp Festival is over, but the memories of this 47th Annual event will remain. If you missed attending the Shrimp Festival this year, here are the highlights in less than six minutes.

Beginning with a glimpse of Thursday’s parade, come see the winner of the Miss Shrimp Festival competition, the night and daytime Invasions of the Pirates, and all of the costume contests. Don’t miss the people, the crafts and artists you may recognize. We even stopped by for a visit with Bad Ass Glass, a “different” stained glass artist and one of my personal favorite booths to visit each year, Robert Linn and his Appalachian Bow Saws. While walking the festival, I finally made it inside the Old Time Photo Shop that recently relocated to Centre Street from 2nd and the owners turned out to be some of the nicest folks!

The kid’s zone was hopping with activities all weekend long and the “Smiley Face” during the fireworks is still being talked about!

Even if you are there it is hard to see everything, but here is your chance to see what you may have missed at the 2010 Isle of Eight Flags Shrimp Festival! Maybe next year, I’ll even have the opportunity to sit down with a plate of shrimp… if I do, I’ll be sure to video that for you, too!

See you next year!!!