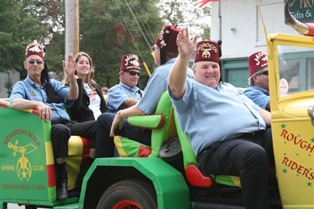 American Legion Post 54 is sponsoring the Veterans Day Parade to honor all who serve and have served. The parade will be held November 6, 2010, in downtown Fernandina Beach and will begin at noon.

The parade route starts at 11th and Ash Streets and proceeds through downtown Fernandina Beach to Centre Street and returns to starting point. Bring your lawn chair and find your favorite spot to clap, cheer, and pay tribute to the Veterans of our great nation.

Veterans Day was originally called Armistice Day as proclaimed by President Woodrow Wilson on November 12, 1919. In 1953, a shoe store owner in Emporia, Kansas started a crusade to turn Armistice Day into Veterans Day to commemorate all veterans, not just those who served in World War I. President Dwight D. Eisenhower marked it into law as an official federal holiday in 1954. It has been recognized as Veterans Day ever since. It is generally celebrated on November 11th, unless that day happens to fall on a Sunday.