Applications are now being accepting for the annual Isle of Eight Flags Shrimp Festival Pirate Parade in Fernandina Beach, FL. 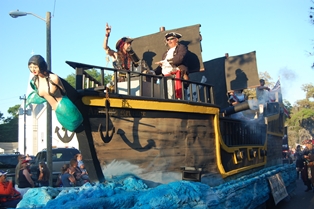 Fernandina Beach, FL – Applications are now being accepting for the annual Isle of Eight Flags Shrimp Festival Pirate Parade, sponsored by The Residence Inn Amelia Island, to be held Thursday, April 28, 2011 at 6:00 p.m., on Centre Street in historic downtown Fernandina Beach on beautiful Amelia Island. Make plans now to participate in this fun and exciting event! Deadline for entry is Friday, April 15, 2011.

The theme for the 2011 Pirate Parade “Shrimping on Island Time” A Celebration of Island Living. Entries are encouraged to incorporate music into their float design. The 8 Flags should be historically accurate. To view footage from last year’s Pirate Parade, go to www.shrimpfestival.com and click on Pirate Parade under the Activities & Schedules index.

Prizes will be awarded for the top three entries in the following categories:

All participants must pre-register by Friday, April 15, 2011. Parade Application packets are available online at www.shrimpfestival.com or they can be picked at The Residence Inn Amelia Island, 2301 Sadler Road, or Amelia Island Convention & Visitors Bureau, 102 Centre Street (Depot), Fernandina Beach, FL. Registered entrants will be notified of the time and place for the parade-staging meeting.

If you have any questions, please call Shrimp Festival Pirate Parade Chairman Desiree Dinkel at (904) 845-2733, or send an email to 4info@shrimpfestival.com. The 48th Annual Isle of Eight Flags Shrimp Festival, presented by Publix Supermarkets, will be held April 29 & 30, May 1, 2011 in historic downtown Fernandina Beach on beautiful Amelia Island, Florida. Bookmark www.shrimpfestival.com to keep up with the latest in festival information.