Celebrate Independence Day at the Stars & Stripes Freedom Festival, to be held in Central Park in Fernandina Beach, Florida 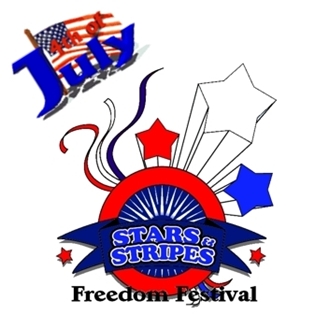 Fernandina Beach, FL – Celebrate Independence Day with your family and join your neighbors and friends at the Stars & Stripes Freedom Festival, to be held in Central Park in Fernandina Beach, Florida on Monday, July 4, 2011 from 10 a.m. to 3 p.m., followed by a patriotic Parade on Centre Street at 7 pm, a Concert of Americana music at 8:15 pm in front of the Depot, and capped by Fireworks at the Fernandina Harbor Marina at approximately 9:30 p.m.

The Stars & Stripes Freedom Festival at Central Park will feature a Touch-A-Truck Public Safety display to exhibit vehicles from the City of Fernandina Beach Police, Fire/Rescue and Streets Departments, Nassau County Sheriff’s Office and Fire/Rescue, Florida Highway Patrol, Coast Guard, and more. The display is scheduled to include cars, trucks, helicopter, boats, motorcycles, dump trucks, garbage trucks, excavators, front-end loaders, 18 wheel log truck, school buses, and other service vehicles and machinery. Visitors can meet some of the personnel who protect, serve and work in our community and learn about functions and features of these vehicles.

Musical entertainment will be provided throughout the festival on the Freedom Stage by The Beech Street Blues Band. Other activities include a Parent-Child Look-A-Like Contest (sign up starting at 10 a.m., contest between 1 and 1:30 p.m.), an All American Apple Pie Contest with a $100 First Prize, teamwork games, Fun for the Kids playground, arts and crafts, and food vendors. Parents and kids, make a thank you card to send to a member of the active military and veterans at the Craft Center.

Everyone is invited to wear their patriotic red, white and blue to either participate in the Stars & Stripes Freedom Festival Parade, which starts at 7 p.m. or find a spot on Centre Street to watch. After the parade, gather in front of the Depot at 8:15 p.m., at the foot of Centre Street, to enjoy a Concert of patriotic and Americana folk music plus a selection of marches and other music in the spirit of Independence Day by the Amelia Arts Academy New Horizons Band.

The Annual City of Fernandina Beach’s 4th of July Fireworks Display can be viewed to the south of the Fernandina Harbor Marina at approximately 9:30 p.m. Be sure to bring your own folding chair!

More information, concert agenda and applications for the contests can be found on the Shiny Badges Ball website under the Stars & Stripes Freedom Festival tab or they can be emailed or faxed. For more information, to participate, volunteer, or to be a sponsor, contact Marty Scott at 904-753-4467, Arlene Scott at 904-753-8774, Sandy Price at 904-206-0756, by fax 904-321-5643, or email shinybadgesball@gmail.com.