Partisan mudslinging is apparently the inevitable action for a democracy assuming that "consensus can only have value after vigorous debate". 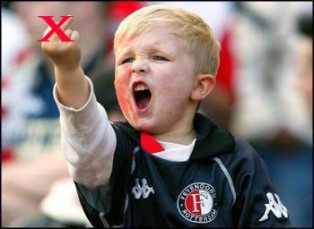 For once be a role model to your children!

I must tell you that I’m totally saddened by the quality of candidates Florida is putting forward, or at least the way they present themselves in the media. And Nationwide the level of Partisan Bickering is even more astounding or maybe I should say disgusting. If we want generations of children like portrayed in this picture, we are certainly setting the standards.

We’re less than a week away from U.S. mid-term elections, and partisan mudslinging is apparently the inevitable and even desirable course of action  for a ‘democratic society’ following the assumption that “consensus can only have value after vigorous debate”.

Even if that were truly the case, which it isn’t as human nature throughout history has proven time and again, the problem is that the media get involved– quite openly these days. Of course there are those media that exist by the pure diversity of ideology and then there are the more insidious ones that pretend to be beyond bickering but  clearly stack the decks in their coverage.
Even when particular articles don’t seem biased, decisions about what to cover and which expert to quote shape perspective, often intentionally.

By the shear nature of what I do, portraying life in the 21st century in words and visuals, I get into a lot of conversations, discussions and arguments each week on where I stand when I write for example an editorial about The Binary Status of Our World. And frankly my objective is not only to be non-partisan, my wish is to be anti-partisan. Partisanship kills creative solutions. Partisanship may seem like a cozy little corner to belong for many people, but it deceives us into thinking there is something to protect beyond our lives on earth.

And these days of the Internet exposes more than ever that opinions don’t require expertise, knowledge or even common sense to have. Media profess an opinion, which becomes mainstream popular by the power of the Internet. Unfortunately however, as partisan as these opinions are, often chewed and reshaped a dozen times before publication, they shape a lot of people’s thoughts and decisions and consequently their actions and fate these days.

So here is a quick take of what is going to happen after next week Tuesday, whether the Democrats do better than expected or the Republicans win a massive victory, the practical result will be the same: The large majority held by the Democrats in the House and Senate will be gone and the dynamics of American domestic politics will change.
Just consider the difficulties President Barack Obama had passing his health care legislation, even with powerful majorities in both houses, and it is clear that he will not be able to push through any significant legislation without Republican agreement. The result will either be gridlock or a very different legislative agenda than we have seen in the first two years.

Obama is appearing on Jon Stewart’s Daily Show tonight, in itself a campaign move as he did several times in 2008. This time however may be a little more aggressive, considering that Stewart was just nominated the “Most Influential Man” in the Nation, no less than 20 positions ahead of Obama.