A hugely successful performer who has sold over 500,000 albums as a solo artist, Abair will appear on Saturday, October 12, at the Omni Resorts Amelia Island Plantation. The Royal Crown Revue, who are often credited with leading the swing music revival of the 1990’s, will perform on Friday, October 11, also at the Omni. Both shows will take place in the Resort’s tented pavilion area.

“We are very excited to have booked these world class artists as headliners for this year,” said DeMerle, “and Fernandina Beach can definitely look forward to some spectacular musicianship.”

The Festival, which will run from October 6-13, will kick off a full week of musical events on the 6th with a Dixieland Jazz Brunch, featuring DeMerle’s Spare Rib Six with vocalist Bonnie Eisele, at David’s Restaurant. That afternoon, the annual free Amelia Park concert will present the TGIF US Navy Brass Band from 4 pm to 6 pm.

Additional events will include Jazz At The Movies on Tuesday, October 8, featuring the inspirational documentary, “Chops”, Red White and Blues Night with the sensational blues aggregation, DieDra and the Ruff Pro Band, on Wednesday, and Latin Jazz Night with the hot dance group, El Niño and the Latin Jazz Knights, on Thursday, October 10, plus a traditional closing event: the Smooth Jazz Brunch featuring AIJF all-stars with Mike Levine and special guest saxophonist Jesse Jones Jr. in the Sunrise Cafe at the Omni on Sunday 10/13. Additionally, Jazz In The Schools programs, clinics, jam sessions and more will take place before and during festival week. 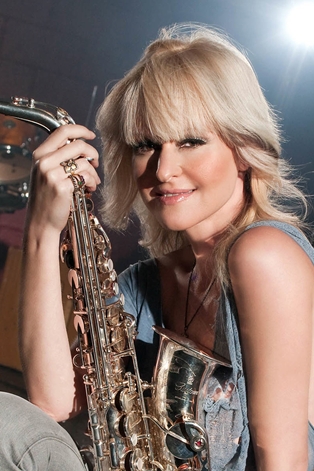 One of the most recognizable jazz horn players in the US, Abair is also well known for being the featured saxophonist on American Idol for the 2011 and 2012 seasons. Over the past 2 years she has toured the US with Aerosmith as their only saxophonist since 1973, sat in for a night with Bruce Springsteen at the famed Beacon Theater and even taken the saxophone chair over for 2 shows with Paul Shaffer and the Late Show with David Letterman. As a solo artist, she has carved out her own brand as “the rocker of the jazz world,” and she adds a refreshingly unique voice to an exciting new generation of crossover artists. According to JAZZIZ Magazine: “Mindi Abair is #1 for her original sound, perfect melodies, grooves and overall sense of fun.”

The Royal Crown Revue (RCR) was founded in 1989 in Los Angeles, CA, by Mark Stern, Eddie Nichols and Mando Dorame out of their love of Rockabilly, Punk, Jazz, Blues, Soul and other styles of roots oriented music. After releasing its first album on BYO Records, the band signed with Warner Bros. Currently, RCR’s lineup is led by singer Nichols, tenor saxophonist/arranger/writer Mando Dorama, and drummer Daniel Glass. The band continues to play to capacity crowds in Australia, Europe and the US. RCR has also made numerous film, television, radio and print appearances, including THE MASK, LATE NIGHT WITH CONAN O’BRIEN, THE TODAY SHOW, and BUFFY THE VAMPIRE SLAYER. The group has recorded and performed live with Bette Midler and composed the original theme for the WB Network’s 1999 television season as well.

A not for profit 501(c)(3) corporation, the Les DeMerle Amelia Island Jazz Festival distributes proceeds toward a scholarship program to fund college educations for aspiring jazz musicians. Tickets are available online at www.ameliaislandjazzfestival.com or can be purchased at The UPS Store, on Sadler Road in Fernandina Beach, and the AIFBY Chamber of Commerce – Gateway to Amelia at A1A and Amelia Parkway.