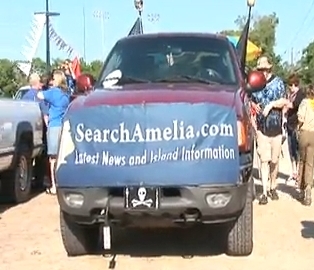 “Home of the Shrimpers: 51 Years of Shrimping” is the theme for this year’s Shrimp Festival Parade, which is returning to Thursday, May 1, 2014, prior to the official start of the Isle of Eight Flags Shrimp Festival.

Parade applications must be completed and returned by April 12, 2014, including the brief written description of the entry and a signed Participation Agreement. Fees run from $30.00 for a non-profit entry to $85.00 for a political or campaign entry.

The Pirate Parade Organizational Meeting and the Pre-parade Safety Meeting will be held on Tuesday, April 29, 2014, at 6:00 pm at the Residence Inn, located at 2301 Sadler Road on Amelia Island. A representative of each registered entry must attend the meeting. Position numbers will be distributed at the meeting and helpful hints will be given to enhance your parade experience.

For more information, please visit www.ShrimpFestival.com, or call Parade Director Billie Childers at (904) 548-1163, or contact her via email at laceintruder@BellSouth.net.