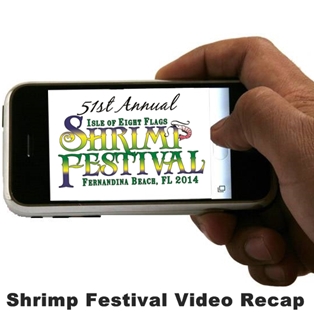 Team SearchAmelia snapped well over 13,000 images, and shot hours upon hours of video during the 2014 Isle of Eight Flags Shrimp Festival. Eight weeks later we’ve sorted through enough of the footage to offer this four and 1/2 minute video recap of the weekend’s exciting activities:

Beginning with the parade, which returned to Thursday evening, the video takes you through the weekend including cameos of Actors Anthony Anderson and Edgar Hansen, scenes from the Miss Shrimp Festival Pageant, the Pirate Invasions, the Little Pirate contests, the Wreath Ceremony and the Blessing of the Fleet and more. Of course, wrapping up the weekend was the traditional performance by The Swingin’ Medallions.

Even with the rain showers on Friday and Saturday the festival was a huge success thanks to an incredible team of volunteers that make up the Shrimp Festival Committee.

This year included a treat from Fresh From Florida Seafood who brought Captain Edgar Hansen of the F/V Northwestern, as featured on Discovery Channel’s “Deadliest Catch”, to the Festival. Another celebrity, Anthony Anderson (Law & Order, The Departed), appeared during the Shrimp Festival to shoot an episode of Food Fest Nation, which will air on Monday, July 21 at 9:00 PM ET. Trust us, it was difficult to keep quiet about this exciting exposure for Amelia Island. Up until the Food Network began advertising this new, eight episode series, we were sworn to secrecy, so you didn’t see any press about the program being filmed during the festival.

In the next few weeks look for event-specific videos and galleries of the Shrimp Festival as we put them together right here at SearchAmelia.com.

Special thanks to photographers Robin Childers and Kimberly Kappal who have never said, “no” to shooting our often odd requests.