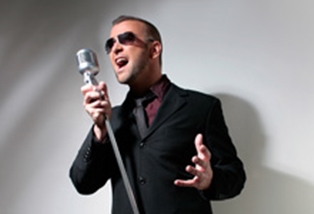 On February 17, 2015, 7:30 PM, Amelia Baptist Church will host renowned countertenor Terry Barber. Acclaimed for his broad vocal range and fluency in musical styles ranging from opera to jazz, Barber will perform a program of light classical and popular music.

Terry Barber has been featured on some of the world’s most storied stages and has worked with many of the music industry’s most prestigious songwriters, composers and producers. Whether performing opera, jazz or popular favorites, he breathes new life into everything he sings and crafts what the Los Angeles Times calls “performances of great vitality and verve.” As a member of the multiple Grammy-winning ensemble Chanticleer, Mr. Barber was called “the jewel in Chanticleer’s crown.” With them, he performed opera, classical, gospel, jazz and folk music in a dozen languages at over a hundred concerts around the globe.

He made his New York City Opera debut in 2001, and the following year he joined the roster of the Metropolitan Opera for its staging of Sly, starring Placido Domingo. Mr. Barber made his debut at Carnegie Hall in 2004, singing the role of Orlovsky in Die Fledermaus with the National Chorale under Martin Josman. He received his Bachelor of Music degree from Northwestern University and was awarded a masters degree in music performance at London’s Trinity College of Music.

Joining Mr. Barber will be Ukranian-born pianist Alina Kiryayeva, who is lauded for her powerful command of the instrument, unique interpretations and charismatic stage presence. Ms. Kiryayeva’s performance schedule takes her around the world.

Now in its fourteenth season, the winter series of the Amelia Island Chamber Music Festival will continue with the Kruger Brothers Band on February 24. Then, on March 1, the Festival will present violin virtuoso Joshua Bell, universally hailed as one of the greatest violinists on the world stage.

The Festival’s spring season will commence on March 29 with a performance by acclaimed pianist Anton Nel and conclude with eight performances in May. Complete information and tickets for all of these performances are available at www.aicmf.com.

Tickets for this and other upcoming concerts are available at www.aicmf.com or by calling 904-261-1779.