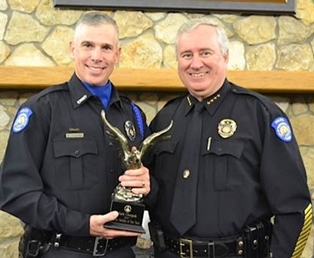 Officer Mark Ocepek was recognized as the officer of the year, primarily for his good work during the course of the year as a valued member of the combined Nassau County Sheriff’s Office/Fernandina Beach Police Department SWAT team, where he also serves as a team medic. 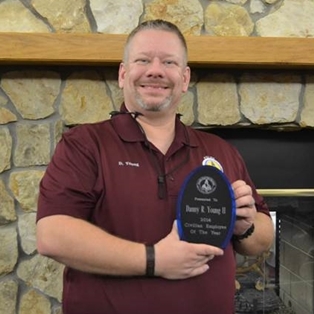 Information technology professional Danny Young was named the police department civilian employee of the year for his good work in addressing more than five-hundred IT issues within the agency. As technology becomes more and more integrated into traditional law enforcement equipment, protocols and procedures, the urgency of IT response and the technical proficiency required to maintain them is a constant challenge. During the past year Danny was called upon time after time to respond to the police station or to log in remotely to repair system failures or other issues, such as security, that affect the twenty-four hour a day operations of the police department.

While some of these services were related to maintenance or repair of a single machine, other projects were much more detailed, time consuming, and security sensitive. 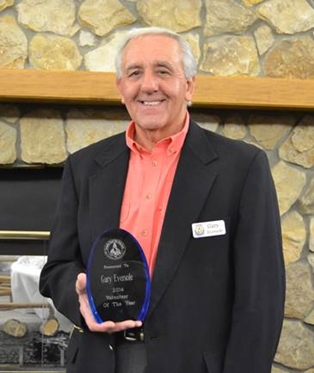 Once again, one of our best shining examples of working smarter has been the use of our Police Auxiliary Corps. This group has been a true blessing to the City, providing competent traffic control and a variety of other duties at our many city events, while relieving sworn officers to focus on other concerns. They are seen at events all over the island, so much so that folks actually expect to see them everywhere. In fact, it is now common to receive event applications with PAC volunteers already inserted into the event planning by the event organizers.

In the past few years our Police Auxiliary Corps, which has about 50 active members, has worked hundreds of events, committing several thousand hours of volunteer time and effort to this community. This group is a tremendous asset and much of their recent success might be attributed to our original board of directors, who deserve a bit of public recognition: Steve Filkoff, John Harris, Don McFadyen, Charles Mitchell, Paul Booton, Mary Ruark, Bob Keller, Jack Dickison, and David Blacklock. This group is responsible for establishing the support organization that we have in place today.

During the past year we have formed the Fernandina Beach Police Foundation, a 501(c)(3) non-profit organization. The new “Police Foundation” sets the policy and controls for the Police Auxiliary Corps, the Police Chaplaincy program, the “S-35” Officer Assistance Program, the Shop with Cops program, and our new “Citizens Police Academy,” which we hope to offer next fall. The new Police Foundation board consists of Chair Harry Kegler, Vice Chair Jody Mackle, Secretary Wendy Langley, Treasurer Mack McAllister, and Directors Lavinia Williams, Judith Lane and Mike Mickler.

Most of our volunteers contribute at large-scale events, such as the many parades and festivals that we host in our City, and their effort is most appreciated. Some participate in almost every event held in the City. These members are truly extraordinary!

Although it is always difficult to select one individual from so many worthy volunteers, Gary Eversole was chosen as the 2014 Volunteer of the Year. Gary joined the group in 2012 and worked eight events that year. In 2013 he worked forty-nine events and in 2014 he worked thirty-four events. According to board members, Gary is a tireless volunteer, often working many extra hours without requiring a break. He also works the school traffic control detail every week, rain or shine, and often fills in when someone is needed. 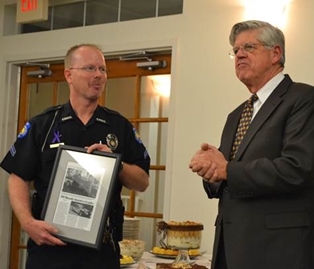 Mr. Jack Heard of Oxley-Heard Funeral Home was selected as our Community Service Award recipient for his long and positive relationship with the City, the Fernandina Beach Police Department, and our individual officers. In 2014 Mr. Heard donated a 2003 Limited Edition Mercury Marauder to the police department, which has become an important component of our School Resource Officer program at the high school. The vehicle has taken on the “Pirate” persona and makes regular appearances around town and at sporting events.

Mr. Heard presented SRO Al Smith with a framed newspaper account of the vehicle and a one of a kind leather driving jacket that was designed for owners of the Mercury Marauder.