2015 Pirate Parade Features Shrimp, Pirates and Fun for All

Applications are now being accepted for the Pirate Parade to be held on April 30, 2015, as a kick-off to the 52nd Annual Isle of Eight Flags Shrimp Festival. 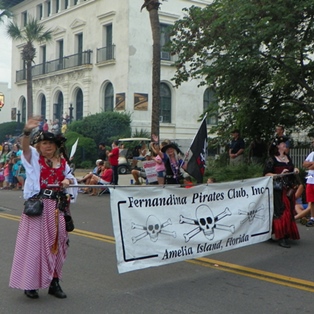 Sponsored by the Marriott Residence Inn on Amelia Island, your business or organization can be a part of the Pirate Parade, too, simply fill out a Parade Application by April 23rd, a Participation Agreement and pay your entry fee. Parade entry fees range from $35.00 for a non-profit organization, to a fee of $85.00 for political candidates.

The Isle of Eight Flags Shrimp Festival is consistently rated by “Sunshine Artist Magazine” in the top 100 North America best events. The street festival features fine arts and crafts, antiques, live entertainment, Blessing of the shrimp boat fleet, pirate invasions, family friendly contests, a Kids Fun Zone and of course, lots and lots of shrimp! Best of all… admission to the festival is FREE!

The deadline to enter the Pirate Parade is April 23, 2015. For more information please visit www.ShrimpFestival.com.