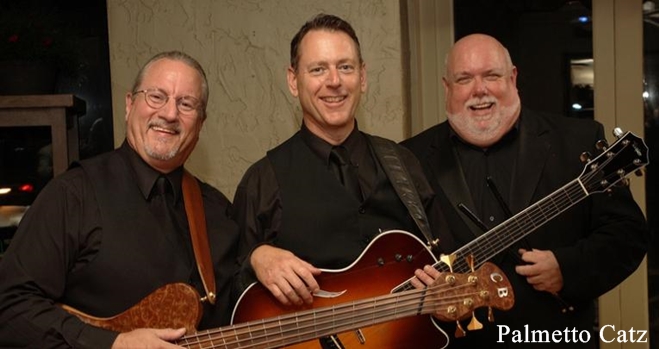 This free concert and street dance will be held in the middle of the street in historic downtown Fernandina Beach, at teh corner of Centre and Second Streets.

Palmetto Catz is comprised of professional, local musicians that know how to put out quality, popular music:

Led by one of the most respected musicians in north Florida, Richard Stratton, on guitar and vocals, he is equally adept at classical, jazz and popular music. Stratton is always in-demand at top venues from Sea Island, Georgia to St. Augustine, Florida as a solo guitarist/vocalist, as classical guitarist with his ‘Trio Dolce’ (flute, violin and guitar) and as band leader of the Palmetto Catz.

Richard is joined by Tommy Gilstrap on bass and vocals. Tommy has played shows with Mary Wells (My Guy), Cecil Womack, Eddie Floyd (Knock on Wood), O.V.Wright and has opened for Archie Bell and the Drells, Kenny Rogers and B.J.Thomas.

Palmetto Catz is an exciting upbeat cover/variety band that leans heavily on classic pop/rock hits from the 1960s and 70s – perfect anytime you want to entertain a diverse crowd: lots of high energy songs with great harmony vocals that everyone knows and loves. With an extensive and diverse repertoire of popular music, Palmetto Catz is always sure to entertain!

Something new this year at Sounds on Centre this year… sno-cones!

We hope to see you all downtown on April Fool’s Day.