Applications are now being accepted for the Pirate Parade to be held on Thursday, April 28, 2016, as a kick-off to the 53rd Annual Isle of Eight Flags Shrimp Festival. 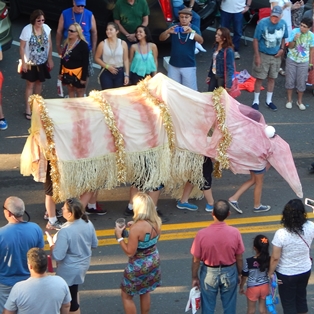 Applications are now being accepted for the Pirate Parade to be held on Thursday, April 28, 2016, as a kick-off to the 53rd Annual Isle of Eight Flags Shrimp Festival. This year’s Grand Marshall of the Parade is Captain Speedy, a man dedicated to the shrimping industry for over 45 years.

Your 2016 Parade Theme is: “Celebration of All American Shrimp”

Sponsored by the Marriott Residence Inn on Amelia Island, your business or organization can be a part of the Pirate Parade, too, simply fill out a Parade Application by April 21st, a Participation Agreement and pay your entry fee. Parade entry fees range from $35.00 for a non-profit organization, to a fee of $85.00 for political candidates. Also, each parade entry must have proof of liability insurance, available from your individual insurance carrier or available at the mandatory safety meeting, with prices ranging from $25.00 to $80.00. The meeting will be held at the Residence Inn on Sadler Road in Fernandina Beach, on April 21st at 5:30 p.m.

The Opening Ceremony for the Shrimp Festival is Friday, April 29th, at 6:00 p.m., followed by the Miss Shrimp Festival Scholarship Pageant at 6:30 p.m. After the Pageant, you’ll want to stick around for a Chicago Blues Night concert presented by the Amelia Island Blues Society and featuring Mud Morganfield, Muddy Waters’ first born son. All booths located at the foot of Centre Street, along the waterfront in historic Fernandina Beach, will be open on Friday. The Kids Fun Zone, located at Central Park on Atlantic Avenue, will also be open Friday evening.

Saturday, April 30th, the festival gets bigger with over 350 arts and crafts vendors joining the fun from 9:00 a.m. to 6:00 p.m., there will be contests, demonstrations, scores of pirates and nationally recognized entertainment. Sunday, May 1, 2016, the festival is open from 10:00 a.m. until 5:00 p.m., featuring the Swingin’ Medallions on the Waterfront Stage.
The Isle of Eight Flags Shrimp Festival is consistently rated by “Sunshine Artist Magazine” in the top 100 North America best events. The street festival features fine arts and crafts, antiques, live entertainment, Blessing of the shrimp boat fleet, pirate invasions, family friendly contests, a Kids Fun Zone and of course, lots and lots of shrimp! Best of all… admission to the festival is FREE!

The deadline to enter the 2016 Pirate Parade is April 21, 2016. For more information please visit www.ShrimpFestival.com.