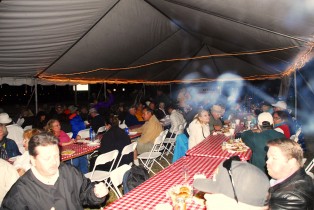 Camaraderie and good times under the tent

Today and tomorrow will feature a souther French feel in downtown Fernandina Beach as the 6th Annual Pétanque America tournament is being played. Unusual cool weather did not stop 324 (167 teams) top Pétanque players from around the World and North America, from coming to Fernandina Beach this weekend to compete for prizes and titles in the 6th Annual Pétanque American tournament, that arguable has become the largest tournament in its field in North America. Up until this year the maximum number of competitors had been limited to 256 playing in teams of two at the River front Downtown, which can accommodate 64 courts.

Additional courts were built in Central Park this year to accommodate the courts needed for almost 70 more players in the growing event. One of the oldest players this year is celebrity chef, TV personality and author Jacques Pépin  who turns 79 next month. Jacques, who also appeared in the first year (2009) will be promoting his latest cookbook and the PBS 26 series cooking show Jacques Pépin: Heart and Soul, that began production a couple of weeks ago. 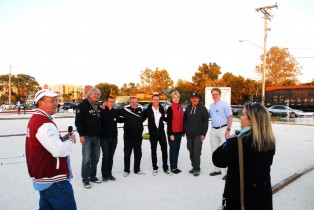 Again this year all eyes will be focused on the performances and workshops of at least 5 current and former World Champions in this game that invites people of all ages to compete.

Today are the preliminary games, organized in such a way that every team plays at least 5 games. Organizer Philippe Boets and his crew of assistants and volunteers believe that 5 games ‘justify’ a trip to Amelia Island every November, a formula that seems to be working well, considering the large amount of familiar faces at last night’s welcome party, which was catered beautifully and plentiful by a number of downtown restaurants.

If you are a spectator, take yourself to the Riverfront in Fernandina Beach today and tomorrow. The atmosphere is truly French Riviera, food, beverages and music wise. We’ll be posting first day results later.