Even though not necessarily a Christmas story, it is the essence of Christmas as new life starts; a virgin road with choices to make. 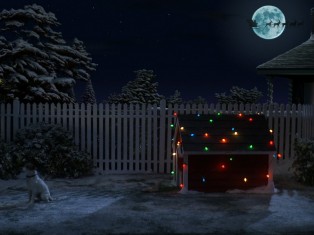 And don't forget your friends

The following tales are not necessarily Christmas stories, but the first one explains much of what Baby Jesus had to face when he was born as it puts life in front of us and explains about the choices we make. It came to me via Ion Yah Mindreci whose philosophy is that you can get pretty much everything you want in life if you will just help enough other people get what they need.

The second story came from Pam Slim about her dad, a man after my own heart.

A carrot, an egg and coffee beans

A young woman went to her mother and told her about her life and how things had turned so hard for her. She said she did not know how she was going to make it and was ready to give up. She was tired of fighting and struggling. It seemed that as soon one problem was solved, a new one arose.
The mother looked at her daughter and took her to the kitchen. She filled three pots with water and placed each on a high heat. Soon the pots came to boil. In the first one she  placed carrots, in the second she placed eggs, and in the last one she placed ground coffee beans.

She let them sit and boil; without saying A word.

“Carrots, eggs, and coffee,” the daughter said.
Her mother brought her closer to the countertop with the three pots and asked her to feel the carrots. She did and noted that they were soft. The mother then asked the daughter to take an egg and break it. After pulling off the shell, she looked at the hard-boiled egg.    Finally, the mother asked the daughter to sip the coffee. The daughter smiled, as she tasted its rich aroma and then asked, “What does it mean,  mother?”

Her mother explained that each of these objects had faced the same adversity: boiling water.
Each had reacted differently. The carrot went in strong, hard, and unrelenting. However, after being subjected to the boiling water, it softened and became weak. The egg had been fragile. Its thin outer shell had protected its  liquid interior, but after sitting through the boiling water, its insides became hardened. Both hard used the boiling water to become something different.
The ground coffee beans however did something unique: they had changed the water and now used the water in a different manner by giving it taste, aroma and color.

The Mother looked at her daughter and asked: “Which are you?”
“When adversity knocks on your door, how do you respond?  Are you a carrot, an egg or a coffee bean?”    Are you the carrot that seems strong, but with pain and adversity you wilt  and become soft and lose your strength?    Are you the egg that starts with a malleable heart, but changes with the heat? Did you have a fluid spirit, but after a death, a breakup, a financial hardship or some other trial, have you become hardened and stiff?  Does your shell still looks the same on the outside, but on the inside you are  bitter and tough with a stiff spirit and hardened heart?    Or are you like the coffee bean?

The bean that actually changes the hot water, the very circumstance that brings the pain. When the water gets hot, it releases the fragrance and flavor. If you are like the bean, when things are at their worst, you get better and change the situation around you. When the hour is the darkest and trials are their greatest, you elevate yourself to another level?  Now you need to decide what you want to be; a carrot, an egg or a coffee bean?

The happiest of people don’t necessarily have the best of everything; they just make the most of everything that comes along their way. The brightest  future will always be based on a forgotten past; you can’t go forward in life until you learn and let go of your past failures and heartaches.

May you wish this Christmas  to have enough happiness to make you sweet, enough trials to make you strong, enough sorrow to keep you human and enough hope to make you happy.

My Dad was leaving the office of his first job as reporter/photographer/sports editor/weatherman at the Roseville Press-Tribune, driving his 1954 Mercury Sedan to his parent’s farm house for dinner.
It was bitter cold outside.

He had a freshly-cut $25 bonus check in his pocket, a fortune for his $57.50 weekly salary.
He was going 40 or 50 miles an hour down the road just outside of Roseville when he saw a couple huddled by the side of the road, hitchhiking. The woman was clutching a small bundle that he realized when he sped past was a baby.

About a thousand yards after passing them, he pulled off the side of the road, hung a u-turn, and went back to get them.
They climbed in his warm car gratefully, and snuggled against the back seat.

“Where are you going?” my Dad asked.
“To Oregon,” the father said. “They are still picking fruit up there, so we are going to get some work.”

My Dad looked out the windshield at the frigid night, and started the car back down the road.
He pulled in the parking lot of a bowling alley where he knew the owner.  “Stay here for a second, I will be right back,” he said.
He went inside and cashed his bonus check at the bar.

He got back in the car, and drove to the Greyhound station, where he purchased two one-way bus tickets to Portland. The tickets came to just about $25.
With some spare bills in his pocket, he got some food at the snack bar and brought it to the couple.
The mother was overwhelmed with emotion.
He waved goodbye, and drove to his parent’s house with a good feeling in his heart.
“Although that $25 was a lot of money at the time, I didn’t really need it,” he told me years later. “I was on my way home to a warm house and big Christmas Eve dinner.”

Merry Christmas from all of us!

May you receive the help you need just when you need it the most,

and may you give help at the moment in which it is most needed.