A Global Village of Collaborative Consumption 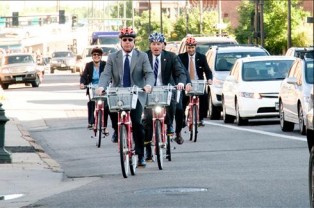 Collaborative Consumption is rapidly on the rise

A dozen years ago my brother Thom and I acquired the web domain name www.GlobalVillage.com as we foresaw that technology over time would enable the trust that is needed between strangers to conduct transactions over the internet. The world was then and still is now, turning into a Global Village because of technology.

Our business plan was strong, yet monetization models of internet companies were  still in the very early stages, a realization that ultimately led to the dot.com bust in 2000. No-one in those days saw Google or Yahoo’s monetization model. Network TV and major Newspaper conglomerates were still collecting 99% of all advertising dollars spend across the globe. Therefore we learned quickly that traditional funding was not available. A dozen years ago Facebook would not be able to create any excitement with JP Morgan or Goldman Sachs when mentioning the possibility of going public. And the Nasdaq was 0nce again a stepchild on Wall Street. So in order to find funding to attract and relocate some whizz kids, we joined another then-new cyberworld initiative called FirstTuesday to connect with Angel Investors, much in the same way as Facebook, eBay, Amazon and many other powerhouses of today’s internet initially came about. The idea for FirstTuesday was great and global as well, but unfortunately for them and us about 5 to 10 years too early. Pretty much the same as with our GlobalVillage.com

Thom and I sank a small fortune into the development before we had to admit that we were not only too far ahead of the adoption curve but also a couple of thousand miles removed from the epicenter of the powers that move viable ideas online and push successfully into the future on the pure mention of stakeholder equity. At the time we were living and working on a small island in the Caribbean, magnificent for creative pioneering but bad for successfully monetizing online concepts.

GlobalVillage.com was all about what today is making waves as the concept of Collaborative Consumption. It describes the rapid explosion in re-applying traditional sharing, bartering, lending, trading, renting, gifting, and swapping, as all those “ancient” practices are now being reinvented through network technologies on a scale and in ways never possible before.

An organization purchases products and manages inventory and checkout Members pay a low monthly or per-use fee to have access to the product. Members check out or reserve the product when needed and return it so another member can have access to it. Many items are usually available so lack of availability is not a strong concern. The organization cleans and maintains returned items.

The benefits of collaborative consumption

Lower cost of ownership by having expenses shared among a group. Higher quality of good. When cost and use is spread throughout a group, the item must (and can) be of higher quality for durability and ease of use. Lower risk. Instead of maintaining an item yourself it is kept functional by the company leading the organization. Lower environmental impact. Instead of buying an item that is only used four or fives a year and thrown away each shared item is of higher quality, lasts longer, and constantly used.

From motherload exchange marketplaces such as eBay and Craigslist to emerging initiatives such as social lending (Zopa), peer-to-peer travel (Airbnb) and car sharing (Zipcar or peer-to-peer RelayRides), Collaborative Consumption is disrupting outdated-last-century modes of business and distribution and reinventing not only what we consume, but also how we consume and share.

The danger of exchange and barter is that this global development is taking financial control away from federal and state taxation opportunities, this last one probably being an important reason why so many governments have their minds set on controlling the Internet. Governments do not shy away from taxing a product every time it changes hands. A car has a substantial life cycle, and every time it is resold through a commercial entity the seller is required to charge and pay sales tax. To picture this process, imagine a $50,000 car is charged a 7% sales tax or $3,500; two years later the car is resold at $31,000 collecting $2,170 in sales tax (assuming the sales tax has not gone up). Another two years later the car is sold again for $18,000 and once again the government collects 7% or $1,260 bringing the total sales tax collected for this one vehicle up to almost $7,000 so far.

Now multiply this by the millions and you see why new exchange markets such as TaskRabbit, ParkatmyHouse, Zimride, Swap.com, Zilok, Bartercard and thredUP are not only enabling “peer-to-peer” to become the default way people exchange, they are also forcing the hand of society to come up with new ways to co-habitate. Whether it’s unused space, goods, skills, money, or services — and exchange, sites like these are sprouting up everyday, all over the world.
Even in our little corner of the world exchange sites are sprouting up on general social sites. For example the navy wives in Kingsland have several complete Camden County sale and barter sites set up on Facebook, an effort being duplicated right here on Amelia Island.

Some of the early Players

For a list of some of the hottest start-ups in the Collaborative Consumption space, check out this Snapshot of Examples from the website http://www.collaborativeconsumption.com.

The infographic below summarizes the essence of
• the three major systems of Collaborative Consumption,
• the four key principles that make it work and
• the key socio-cultural drivers that have caused the movement and is moving it forward 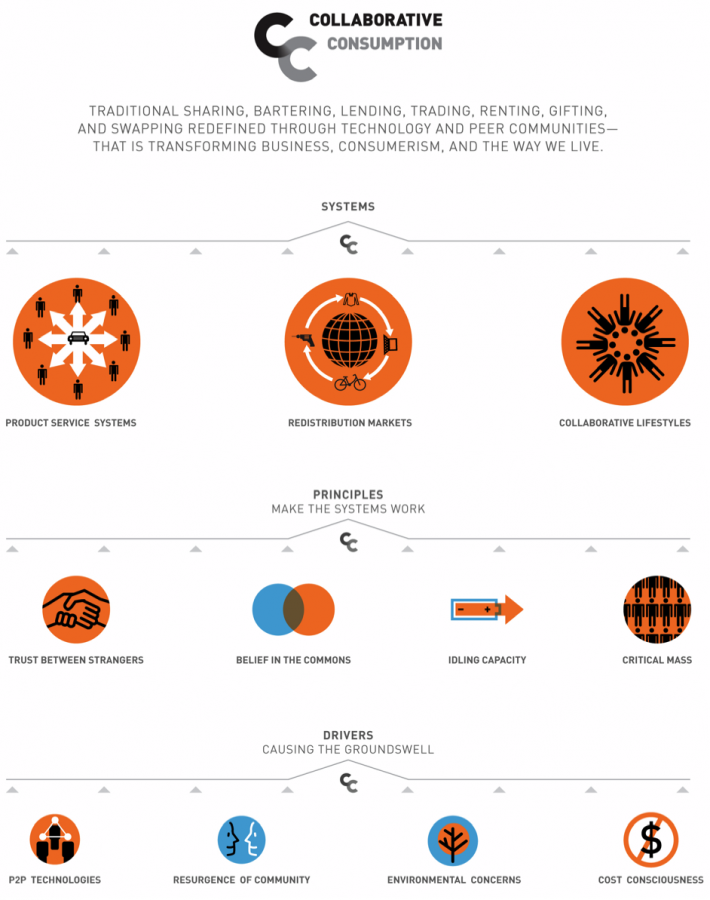 This is how the system works in the time of technology

Business models of the future are anchored by and in our connections to each other, rather than how we traditionally exchanged goods and services and the lessons we learn from this new Exchange Market Model is that

1. a Framework of Trust needs to be in place (eBay Feedback, Tripadvisor, Angie’s List etc)
Since the ‘collaborative’ in collaborative consumption is powered by strangers, middlemen need to guarantee peace of mind between everyone else. Brands are worth much more if they offer some way to measure and review business transactions, and if they are able to leverage reputational ratings and social capital to keep users in line.
Airbnb for example, which helps homeowners rent their spaces to travelers around the world, is a prime example. Airbnb users can tailor their experience to fit their needs, from managing listings to researching reservations to pre-approving guests. Hosts are even protected from theft and vandalism with $50,000 worth of insurance coverage.

2. for a business to be successful it needs scaleability. Technology allows us to connect fragmented markets.
Collaborative consumption is all about networking around offers and needs. So you need a niche. Look at your market and examine the pieces that don’t fit together as well as they could. Ask yourself: “Could there be a meaningful connection between fragmented parties? Could I facilitate a transaction that would be complementary to their core product or service?” Years ago, when the internet made its first inroads I was surprised to learn that a car junk places were inter-connected on parts availability. If the junkyard in Lake City couldn’t help you with a particular part, the one in Live Oak or High Springs or MacClenny probably could. Quick, cheap and easy.

Innovators who identify the missing links can take advantage of service gaps with long-tail business strategies, the way Netflix and Amazon have done. If you find a way to serve everyone who wants to rent a Gibson Les Paul for a weekend or a Sony Handycam HDV or a car with the steering wheel on the opposite site of the norm, or a last minute Scalpel Ticket exchange etc., you’ve got a business that can scale.
Zipcar is an example of collaborative consumption in action. It recognized a need for on-demand vehicles that are billable by the hour, particularly in major cities and college campuses. Chase introduced an affordable alternative to traditional car ownership, providing people with shared wheels at a fraction of the cost of a long-term purchase or even rental.

3. Geography matters less and less
Technology reduces geographic boundaries to commerce, opening the door to ventures such as Freecycle, a global grassroots network with almost nine million members who swap unwanted items free of charge. Members not only get free stuff, whether they’re in Tucson, Arizona or New Delhi, India, but also help reduce waste and save resources. Collaborative consumption can be good for consumers, for business and for the community at large. The only entity that has not been able yet to move outside of the box of the past is a government that sees a part of their tax revenue dwindle.

Collaborative Consumption. Check it out. It’s going to be a household word soon.