A Hundred Years of Cruising

The answer to the question if bigger is really better, will always depend on the taste and class of who asks the question. The Titanic and the Allure of the Seas only compare in numbers. 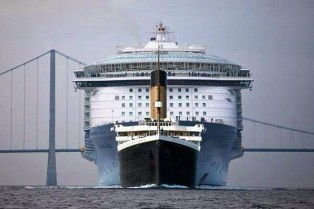 Cruising became quite popular around the turn of the 19th century, even though it had been a favorite for nobility and royalty since the 1830s, when nobles, authorities, and royal princes from all over Europe sailed in just over three months the Mediterranean islands, coastlines and famous cities on a ship called the Francisco I, which flew the flag of the Kingdoms of Sicily and Naples. Most ships that operated passenger transportation in those days were called ocean liners. Constructed as ocean liners, they did not meet the requirements of the pleasure-seeking market and offered few amenities aboard.

The first cruise ship built exclusively for the purpose of vacationing on a ship was the Prinzessin Victoria Louise in Hamburg Germany, even though she did quite a few Atlantic immigration crossings in the short 6 years of her existence. In the early days of huge immigration to the US, many shipping companies build transatlantic ocean liners as was the luxurious ‘Titanic’.

The following comparison shows that numbers between the Titanic, the largest ocean liner in 1912 and The Allue of the Seas’, the largest cruise ship in the world today are in most areas such as length, height and speed not that dramatically different. What makes the huge difference however is the width, creating a 5 to 1 gross tonnage difference, which is why on the picture it looks like the Titanic is going to be swallowed by the Allure.

Here are some more numbers and a picture show off the enormous amount of food is prepared in 18 kitchens on the allure.

The Titanic, the world’s largest cruiseship in 1912 had the following specs:

In comparison to the latest ‘floating city’, the Allure of the Seas, the differences seem substantial except when you compare
specific statistics such as speed, overall length, height.
This baby holds 6,318 guests & boasts 2,384 crew.
Unbelievable!
The Allure of the Seas is the largest passenger ship ever constructed and the  Statistics are simply mind-boggling: