A Senate Bill that will Reverberate Throughout History

Even if we don't believe what we prefer to be true, last week's senate bill on drones has buried the cost of freedom. 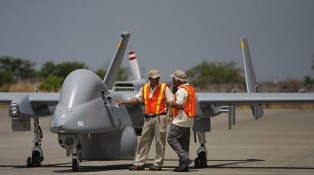 A Drug Drone back in for refuelling

Last night at the come-back-safely party of a very close friend who had decided to go join the company that is contracted by Washington to bring back all  equipment and goodies from Afghanistan, as Obama is pulling the plug on that one as well, my eye caught a breaking news alert on one of the TV screens along the back walls of Chili’s near Target.

A silent screen stared at a restaurant full of people, as the sub-titles indicated that Google was getting a raft of crap about security and privacy issues. I look around the standing room only restaurant to catch a glimpse of someone seeing the same message on that TV and than I realized the irony of it all. These people were out to forget about their daily worries as is the large majority of the people in this country, and absolutely clueless of what is happening or if not, they have given up caring any longer.
Here is why I have to come to the conclusion that English philosopher, statesman, scientist, lawyer, jurist, author and pioneer of the scientific method Francis Bacon was absolutely correct in his observation that “Man prefers to believe what he prefers to be true.” It’s a amazing how little has changed in the human gene over the last 400 years.

Here is what happened earlier this week when the US Senate overwhelmingly passed a bill opening the nation’s airspace to some 30,000 drones. Naturally, this has stirred concern – as well it should – among pockets of the population, who concern themselves with such “arcane concepts” as privacy, individual rights and the rule of law. Such small pockets of the populace actually, that I never saw a mention of it on News TV.

I have no doubt that at one point in the not-too-distant-future, the veiled introduction of this legislation will be recognized as the historical milestone when privacy became a luxury of the past.

I know I am blessed as I quite often sit outside in the evenings here at the beach and watch the millions of stars and galaxies. But, other than the occasional faraway satellite, I expect to see little more than clouds and some airplane navigation lights. (Red right – return flashes back from my sailing days).
Five or ten years down the road, however, you will find yourself wondering if that light is actually a plane or a drone. And nervous that it might be the latter putting its focus on you, you’ll wonder if you have observably broken a regulation, ordinance or law.
Even in the confines of your house or office, you’ll find yourself wondering if the drones picked up your angry comments about the latest outrages of the political state. Of course you may still be one of those saying: I have nothing to hide, my life is all above board and in line with the going cultural acceptance of majority rule, but deep inside you know the smallest aberration can land you in deep water.

Show me a world without skeletons in the closet and drones will be out of a job. But that’s not how it works. Just ask Francis Bacon and his 400 year old observation: “Man prefers to believe what he prefers to be true.”

In short, the world will be a different place, and given the experience with human history “not for the better”

Can we still turn the clock back?

Hardly. The drones are relatively cheap to make, can operate without jeopardizing lives and what’s even more important: THEY WORK and because they are so efficacious, you can be completely certain that they will be widely deployed. The problem is obviously not the drone. The problem comes from us. Drones are popular with everyone and their utilitarian functionality guarantees they’ll be cranked out like ice cream on a hot summer night. Three years ago there were 2 companies (US for sure) that produced drones. Today there are more than 30. Even though drone technology is still relatively new, it has already evolved to the point where its utilitarian advantages over competing technologies are undeniable. Never mind that at this point the most impressive advantages are obviously militarian, with so many countries and companies jumping on the bandwagon, drone technology will soon be applied to virtually every aspect of life anywhere in the world.

For anyone with a capacity to think creatively, it should not be hard to find a long list of uses for drone technology from peaking into your backyard when you’re sunbathing to “securing” borders, detecting illegal vegetation, speed monitoring, drug trafficking, gunning down fleeing criminals, all activities deemed deplorable by law-abiding citizens. The problem once again lies with the authorities that create laws that step on constitutional freedom as if it were an arcane luxury. What the Air Force has, the Army, Navy, Marines, Coast Guard, FBI, DEA and all other modules of what is generally lumped together as Homeland Security will also want.
I recently heard from a Navy Captain close to the program about an $800 million dollar remote controlled submarine disaster, the target precision was way off) which has now however resulted a remote-controlled miniature attack sub, while four-wheeled, weapon-firing street drones are able to chase a perp to ground with extreme prejudice.

It is sad, but having formed a strongly positive attitude about drones, history dictates that governments in all its various manifestations will, in time, overdo it. And the passing of the bill last week in the Senate will ultimately be declared the beginning of the Era of the Drone.