A Wonderful Story for People who Care

This story is a perfect example of why first impression judgments can lead to wrong conclusions which, unless rectified, devalue the richness of human interaction. 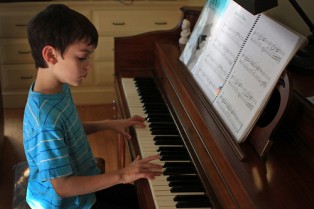 A finely tuned piano is a precious guide through life

This story is not new, but after watching Miracle on 34th Street and It’s a Wonderful Life for the 20th time during the Holiday Season, neither is the deeper message and meaning. It is great read and it makes you wonder what has happened to the richness and the civility of our lives.
This is a true story as told by Mildred Honor, a former elementary school music teacher from DesMoines, Iowa. And if there is a human bone in your body, you can both identify with it, as it will give you the chills.

Story – I have always supplemented my income by teaching piano lessons – something I have done for over 30 years.
During those years I found that children have many levels of musical ability, and even though I have never had the pleasure of having a prodigy, I have taught some very talented students.
However, I have also had my share of what I call ‘musically challenged’ pupils – one such pupil being Robby..

Robby was 11 years old when his mother (a single mom) dropped him off for his first piano lesson. I prefer that students (especially boys) begin at an earlier age, which I explained to Robby. But Robby said that it had always been his mother’s  dream to hear him play the piano, so I took him as a student.
Well, Robby began his piano lessons and from the beginning I thought it was a hopeless endeavor. As much as Robby tried, he lacked the sense of tone and basic rhythm needed to excel.  But he dutifully reviewed his scales and some elementary piano pieces that I require all my students to learn.  Over the months he tried and tried while I listened and cringed and tried to encourage him.

At the end of each weekly lesson he would always say ‘My mom’s going to hear me play someday’.  But to me, it seemed hopeless, he just did not have any inborn  ability. I only knew his mother from a distance as she dropped Robby off or waited in her aged car to pick him up. She always waved and smiled, but never dropped in.

Then one day Robby stopped coming for his lessons. I thought about calling him, but assumed that because of his lack of ability he had decided to pursue something else. I was also glad that he had stopped coming – he was a bad advertisement for my teaching!
Several weeks later I mailed a leaflet recital to the students’ homes. To my surprise, Robby (who had received a leaflet) asked me if he could be in the recital. I told him that the recital was for current pupils and that because he had dropped out, he really did not qualify.
He told me that his mother had been sick and unable to take him to his piano lessons,
but that he had been practicing. ‘Please Miss Honor, I’ve just got to play’ he insisted. I don’t know what led me to allow him to play in the recital – perhaps it was his insistence or maybe something inside of me saying that it would be all right.
The night of the recital came and the high school gymnasium was packed with parents, relatives and friends. I put Robby last in the program, just before I was to come up and thank all the students and play a finishing piece. I thought that any damage he might do would come at the end of the program and I could always salvage his poor performance through my ‘curtain closer’.

Well, the recital went off without a hitch, the students had been practicing and it showed. Then Robby came up on the stage. His clothes were wrinkled and his hair looked as though he had run an egg beater through it.  ‘Why wasn’t he dressed up like the other students?’  I thought. ‘Why didn’t his mother at least make him comb his hair for this special night?’

Robby pulled out the piano bench, and I was surprised when he announced that he had chosen to play Mozart’s Concerto No.21 in C Major. I was not prepared for what I heard next. His fingers were light on the keys, they even danced nimbly on the ivories. He went from pianissimo to fortissimo, from allegro to virtuoso; his suspended chords that Mozart demands were magnificent!
Never had I heard Mozart played so well by anyone his age.

After six and a half minutes he ended in a grand crescendo, and everyone was on their feet in wild applause!  Overcome and in tears, I ran up onstage and put my arms around Robby in joy.  ‘I have never heard you play like that Robby, how did you do it?

Through the microphone Robby explained: ‘Well, Miss Honor …. remember I told you that my mom was sick? Well, she actually had cancer and passed away this morning. And well …… she was born deaf, so tonight was the first time she had ever heard me play, and I wanted to make it special.’

There wasn’t a dry eye in the house that evening. As the people from Social Services led Robby from the stage to be placed in to foster care, I noticed that even their eyes were red and puffy. I thought to myself then how much richer my life had been for taking Robby as my pupil.

No, I have never had a prodigy, but that night I became a prodigy ……. of Robby.  He was the teacher and I was the pupil, for he had taught me the meaning of perseverance and love and believing in yourself, and may be even taking a chance on someone and you didn’t know why.

Robby was killed years later in the senseless bombing of the Alfred P. Murray Federal Building in Oklahoma City in April, 1995.

Publisher’s Note: I have changed the original footnote to this emailed story that asked for resending it to my email list with a message of hope and belief that we can all make a difference in this world, into a request to change an attitude we are all guilty of…judgment.
Two sentences in this story stood out like a sore thumb for me:

• He was a bad advertisement for my teaching!
• Why didn’t his mother at least make him comb his hair for this special night?’

Seemingly trivial interactions between two people always present us with a choice: stay open or judge.
We are all guilty of judging. I learned the hard way many years ago in the Subway in Manhattan, when a dad with 2 young sons entered “my car”. I was reading and the kids were overly loud and jumping and dad was sitting quietly in the corner, staring into nowhere. I berated him about not controlling his kids. He apologized, got the boys to quiet down and shared that they just came from the hospital where his wife and their mother had died a little earlier. I have never again judged an apparent situation or a person without having a chance to evaluate a number of observations. Which equals the choice: Do we act with compassion or do we ignore that opportunity and leave the world a bit colder and poorer in the process?