ABC Fine Wine and Spirits Opens Across the Bridge 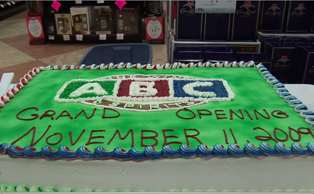 In a series on highlighting Florida companies that have an apparent Ace up on the economy, we went to the Grand Opening of ABC Fine Wine and Spirits out on SR 200/A1A just across the bridge on the mainland. This company, just like Publix Supermarkets (which we highlighted last week) has a corporate philosophy that moves with the economy. Anti cyclical investing is the way to grow in a bad economy and that’s what ABC does. General Manager Tom Perkins explained that they are expanding in all corners of Florida with the new concept store, resulting in three more store openings this month alone.

I frequented ABC Liquors as a “member with benefits” when living for a while in Lake City in the mid- nineties. Okay I know that all by itself it needs an explanation, but that’s for another story. ABC Liquors in those days was pretty much like other chain liquor stores; a good but not exceptional choice of brands and quality ranges. Well…that has changed! ABC headquartered in Orlando now features about 150 stores throughout Florida and a constant expansion program that showcases Wine and Fine Spirit Gallery type stores.

It would not be fair to call the new concept simply a liquor store on a larger scale. The store lay-out and selections of wines, champagnes, sherries, port wines and adult beverage choices is impressive, while complemented by a wide array of topshelf party foods and accoutrements. I apologize for having to go French here, but I simply could not put my vocabulary on an English word that would describe the selections accurately.

ABC Fine Wine and Spirits deserves more than just a quick in and out for a bottle of this or that. It’s an experience to savior from the fabulous hand rolled cigar selections to wines from around the world. A very welcome addition to the quality that is Fernandina Beach and Amelia Island and considering the attendance during Wednesday’s Grand Opening a hit. The sizable parking lot was filled to capacity and cars were lined up along A1A almost to the bridge… and that while the weather was most definitely not cooperating.