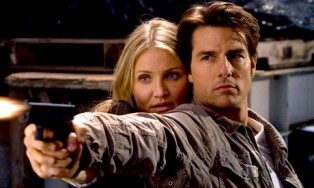 9 years after Vanilla they still have great chemistry

As Disney opens casting calls for ‘Pirates of the Caribbean: On Stranger Tides’ in Los Angeles and Tom Cruise and Cameron Diaz “flop” in something called “Knight and Day”, the question on my mind is what works in the American Movie Industry? Toy Story 3? Karate Kid 3? Iron Man 2? Sex and The City 2? The A-Team? Shrek Forever? God forbid. Where are all of the NEW Ideas in Entertainment, beyond Spacial Attack Movies and Horror Flicks that can not even qualify as entertainment?

The movie business of today is all “pre-sold” IP.  NEW media has become the home of innovation and imagination. “Knight and Day” cost $107 million to produce, yet did “only” about $40 million between last Thursday’s release date and yesterday. Most industries would would love this type of return in the first 3 days of launching a product, but in this time of voracious consumerism, content is old and smelly after a week.
Of course the movie will make its cut and do a couple of hundred million worldwide before it ends up in the archives, but it has tarnished Cruise’s reputation as one of the biggest stars of all time.

And this is the state of America today: The movie’s fizzling at no.3 this weekend comes as a result of Cruise’s erratic behavior a couple of years ago, including the couch jumping incident on Oprah. No consideration for the fact that the storyline of this type of movies (spies??) is so 1980s, or that Cruise and Diaz may not be a perfectly convincing romantic affiliation for an audience of 18-30, no consideration that globe trotting movies had its own following years ago, but since Bachelorette’s takes hordes of pursuers from Iceland to Istanbul and from Paris to Singapore, these scenes are less interesting that Contenders in the Amazing Race finding geo markers in Outer Mongolia.

But my personal opinion is that the ranking of Toy Story 3 as number one for the weekend with $59 million is because it’s scorching hot out there this summer and parents need to keep their kids somewhat entertained, so a nice cool theater is a great place to be for the heat in the afternoon.

That Sander with Grown Ups collects $41 million at the Box Office is more or less based on Expectation. You simply expect that if you mix great comedians like Adam Sandler, Kevin James, Rob Schneider, Chris Rock and David Spade together, you’re looking at a couple of hours of hilarious fun.

Cruise and Diaz kind of become second choice here in the line up.

What will Hollywood look like in a couple of years?

Besides the unstoppable need for content, nothing is more important to U.S. consumers than their entertainment choices, but are movies and broadcast TV even relevant in the new world of entertainment?

At this stage it seems that the convergence of content, internet, mobile applications, games and social media will be the onrushing asteroids that will soon destroy the movie dinosaurs, limiting the Rise and Fall of Hollywood to a century mark? The Box office drop for Summer movies compared to last year is 11%. That should be saying something of the direction we’re going. A family of 4 with popcorn and sodas is looking at close to a $100 for 2 hours of entertainment.

Next observation is the arrival of 3-D. Is it a time limited fad, or will new technologies like 3-D keep going to the movies from being relegated to the dustbin of history like Vaudeville, the afternoon newspaper, the evening news, the variety show, and the compact-disc?
Has the U.S. movie box office – traditionally the holy grail of movie industry metrics — become increasingly irrelevant. Cruise’s new action flick, resembles a “Mission Impossible” theme, which in itself is already a huge remake franchise?

The Pirates of the Caribbean franchise finished all of its ocean scenes in Hawaii(?) and is now calling for stand ins and doubles to finish up the movie in LA. A “Pirates of the Caribbean” episode shot around St.Lucia or St.Vincent is soothing to me as I recognize sceneries such as Les Titons as truly Caribbean; a Pirate’s of the Caribbean shot around China Man’s Hat in Hawaii, kind of turns me off, especially since this story is written around New Orleans and the search for the Fountain of Youth. And if enough people get turned off, one of my favorite Character Actors – Johnny Depp -, may lose his superstar investment value, because he was once dating Winona Ryder.

What is the future of Pay-Per-View/Video-on-Demand (PPV and VOD)?

Video-on-demand alone is estimated to grow from a $1.1 billion dollar business this year to $5 billion by 2012, taking market share away from DVD retailers and intensifying the carriers’ ambition to bid for the best (and first run) titles.

How about Internet Video?

Annual U.S. revenues from internet video services spanning user-generated content to television shows and movies will exceed $7 billion by 2012.
And this business is becoming LESS advertising driven — transitioning from today’s model of more than 85% of revenue being ad-based to less than 60% and trending down with the balance being generated by content payments, either for one-time viewings or via subscriptions.

Rather than install my opinions on where this part of the entertainment industry is going on you in this editorial, I would like to invite your opinions and comments on the following questions:

1. What do these these new realities mean for the content creators of new media and for traditional studios, filmmakers, producers, and distributors?

2. What is the future for good-old fashioned, Primetime TV, DVD rentals and sales?

3. Have you ever shot some video on your camera and uploaded it to youTube or other user content generated websites?

You can use the comment column or send an email to publisher@searchamelia.com