Next week, children will be knocking on neighbors' doors chirping "Trick or treat!" But we don't all have neighbors like Mr. Rogers. 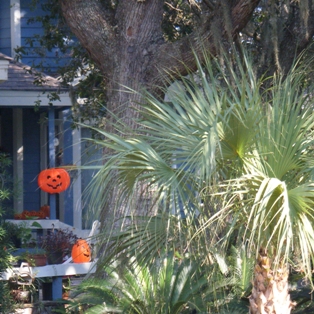 The National Association of Realtors has a website, HouseLogic.com. This is a free source of information to help you make smart decisions about your home in areas like home improvement, maintenance, insurance and more.

We received the following article from them just in time for Halloween where they have listed some of the craziest, creepiest and grossest neighbor behavior, and provides some valuable advice for managing neighbor-on-neighbor disputes.

“Next week, children all across America will be knocking on neighbors’ doors chirping “Trick or treat!” and skipping back home with hoards of candy. But we don’t all have neighbors like Mr. Rogers. Every home comes with a community; people you live with all year round. For Halloween, HouseLogic presents a few horror stories of bad neighbor behavior—and offers some practical advice.”

It started Sept. 21, when a chicken-owner from Tyler, Texas, saw his neighbor’s dog carrying off one of his chickens—and it ended with gun shots, reported the local NBC affiliate KETK. According to investigators, the first bullet came from the chicken owner’s gun when he attempted to rescue his hen. But the dog’s owner returned fire, sparking a brief but scary shootout that brought the cops onto the scene. Thankfully, no one was hurt—though there’s no report on the fate of the stolen chicken.

Neighborly Tip: While the chicken owner was technically operating within his rights, we wouldn’t advise using a gun to solve the problem. If you feel you, your pets, or your children are in danger from a loose neighborhood dog, try using dog pepper spray or ultrasonic dog repellent—a much more humane and much less dangerous defense.

The Neighbor Who ‘Borrowed’ the Car

Last November, a Jacksonville, FL, woman found her neighbor dead in his home and then found a way to profit from the situation, local news reported. The 33-year-old woman didn’t report the death to the authorities. Instead she chose to “borrow” a few things from her deceased neighbor: his checkbook, his credit cards, and his car. But the authorities caught up with her before long, and she was arrested and charged with fraud and burglary.

Neighborly Tip: Most identity thieves don’t wait for such an “opportunity.” These steps, provided by the Federal Trade Commission, can help you protect yourself against identity theft.

Neighbors in an Ohio suburb had been feuding for two years when one of them kidnapped the other’s dog and took it to a local shelter, says a local report. The culprit told kennel staff he had found the dog running around some railroad tracks. When the dog’s owners asked, the neighbor denied any involvement. But after finding their pup in a shelter, they contacted the police with their suspicions.

It wasn’t long before the vengeful dog-napping plan was uncovered. The dog-napper was arrested, sentenced to a month in jail, and ordered not to have contact with his neighbors.

Neighborly Tip: His frustration isn’t entirely unreasonable. A loose dog could be dangerous, or end up hurt if it runs in the path of a car. But a call to Animal Control would have been a better solution. Ohio (like most states) has a leash law, which states that a dog must be leashed and controlled by its owner or keeper at all times, except during recreational hunting.

For the former Alaskan Governor, Republican Sarah Palin, being in the spotlight is nothing new. But when writer Joe McGinniss, who happened to be researching his unauthorized biography about her, moved into her neighbor’s house in May, it was a little too close for comfort.

Palin posted an acerbic message on Facebook condemning the move, and erected an 8-foot fence around her property to thwart any “peeping.” In early September, McGinniss moved back home to finish the book, but maintains that Palin herself was the inappropriate party, saying her reaction to his presence was out of line, bordering on harassment.

Neighborly Tip: Whether you’re in Palin’s shoes or McGinniss’, neighborhood harassment laws do exist. They vary from state to state, and it’s important to make sure you know what constitutes harassment in yours.

It sounds like the plot of a horror movie, but it’s true. In 2006, the residents of Bottomley, West Yorkshire, England, were the victims of a 16-month rampage by an angry neighbor, the BBC reported. The perpetrator played loud choral music about rape and pillage, damaged vehicles, set booby traps, and littered the road with dead animals, dog feces and nails.

Eventually the judge slapped the accused with an anti-social behavior order (basically a restraining order here in the States). The woman filed for an appeal in 2008, but was denied and fined £200,000 for breaching the order on two occasions.

Neighborly Tip: It’s unclear exactly what initially set her off, but before you go off the deep end and do something you’ll regret, take more reasonable, legal steps. You don’t have to take abuse, either. Get your HOA (Homeowner’s Association) or the city involved if you feel you’re being threatened.

Even celebrities get a little nasty when it comes to their properties. But none took things quite as far as the infamous 2004 fence feud between actor Jim Belushi and former Catwoman Julie Newmar.

It started simply enough: Belushi wanted to make the fence around his property higher for more privacy. But Newmar, who had spent decades caring for her prized rose garden, wasn’t having it. She argued the higher fence robbed her plants of sunlight. Years of both public and private griping followed. Belushi accused Newmar of tearing down his fence and egging his house. Newmar accused Belushi of being such a noisy neighbor she had to use air traffic controllers’ earmuffs.

Belushi sued Newmar for $4 million for harassment, defamation, and vandalism. The two eventually reached a compromise through mediation, settling the lawsuit. Later Belushi had Newmar on his sitcom According to Jim, in which she played, you guessed it, his grumpy neighbor “Julie”.

Neighborly Tip: Before letting things get so bad that you find yourself getting slapped with a lawsuit, try mediation first. HouseLogic’s guide to mediation gives you a step-by-step process of how to handle an issue with a neighbor before it gets out of hand.