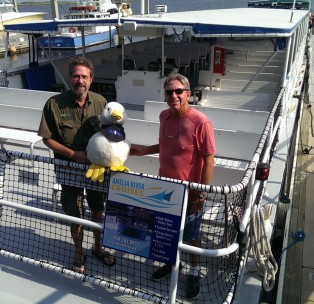 We’ve been seeing The Aflac Duck all a round the island and on mainland Nassau County recently: in Yoga classes, at football games, around any of the many lakes and ponds and just the other day on an Amelia River Cruise. From reliable sources we have learned that The Duck is making the rounds in our community to complete an inventory of potential supplemental insurance scenarios typical for our coastal lifestyle.

The Aflac Duck just loves Amelia River Cruises after spending a fun morning on board with Captain Kevin and Captain Kirk as they had a great time together, except for a brief moment during the Life Vest instruction, when the precocious duck obviously did not pay attention as the duck clearly does not need a life vest as he floats no matter what happens. He also has his own propulsion system consisting of two webbed feet that can move faster than the speed of light!

During the tour the Duck mingled with cruise guests young and old, occasionally muttering the word AFLAC when catching someone without sunscreen or cap as this outing was clearly focused on sun and water and the risks attached to both.
Amelia River Cruises is one of the most popular “Things to Do” on Amelia Island with several cruises every day of the week with convenient times to choose from. People can chose from the Shrimping Eco Tour, the Classic Rock Trivia Cruise, the Cumberland Island Tour, the famous Sunset Cruise, just to name a few!

If you want to know more about Aflac plans for you, your family or your business please call Nancy and Bob Dervaes, your Aflac agents at 904.624.0160.