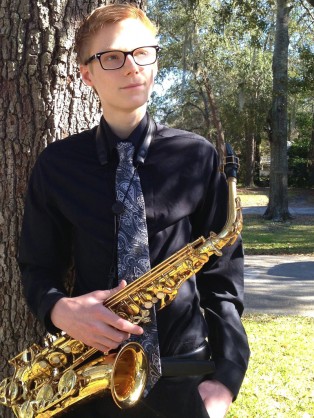 Luke Stribling, a promising young alto saxophone player from Orange Park has been named the latest recipient of the annual jazz scholarship from The Les DeMerle Amelia Island Jazz Festival. A graduate of the Douglas Anderson School Of The Arts who is now a freshman at the University Of Central Florida, Stribling will be among those performing at this year’s festival in Fernandina Beach, October 16 – 19.

The festival’s Jazz Advisory Board chose Stribling after auditioning several candidates from Northeast Florida and other areas of the country.
At 19 Stribling already boasts a slew of impressive honors. He was a member of both the Allstate Concert and Symphonic Bands and achieved Superior Ratings at solo and ensemble playing from the district and state throughout high school.  During his senior year he led the saxophone section for the Douglas Anderson Wind Symphony, which performed nationally, including a concert at Carnegie Hall in New York.  Additionally, Stribling received the prestigious Louis Armstrong Award for outstanding achievement and superior musicianship.  Along with his college studies, Luke fronts his own band, the Jive Katz Collective.

Stribling said his earliest music teacher, Jim Daniel, turned him on to jazz, especially from the swing and bebop eras.  Furthermore he was inspired by the music of Jacksonville’s notable pianist, Marcus Roberts.  “I have also been highly influenced by Cannonball Adderley, Paul Desmond, Lee Konitz, and of course, Charlie Parker,” he said.

Luke is already considered “one of the best young saxophonists in the country,” according to Ace Martin, the school’s Instrumental Music Chairman. He’ll have a chance to show off his chops when he sits in with the Les DeMerle Jazz All-Stars featuring vocalist Bonnie Eisele for the AIJF Sponsor’s Party, Monday, October 13 at the Omni Amelia Island Plantation Resort-Heron Room at Racquet Park; then, he will join the Next Generation Jazz Band on the outdoor Birdland Jazz Stage preceding each of the headliner shows by Tony Monaco and Randy Brecker at the Omni Resorts Amelia Island Plantation on October 17 and 18, respectively.

“Luke is a strong, mature player and has an exemplary academic record,” said DeMerle, the festival’s Creative Director.   “He is well versed in the history of jazz from the beginning, and best of all, he knows how to swing!  We are very excited about playing with him at the festival, and everyone who attends can expect a wonderful evening of great jazz.  It is most gratifying to hear upcoming musicians like Luke, and our festival will continue to add inspiration and financial benefits to help advance this great American art form.”