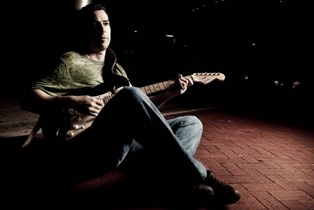 When Albert Castiglia walks onto the RockTenn Stage to headline the Amelia Island Blues Festival on Saturday night, September 17th, he will no doubt be welcomed back to Fernandina Beach by a solid and enthusiastic Amelia Island fan base.

Locals will recall that Castiglia performed at a fundraiser for the Nassau Humane Society at Sheffield’s at the Palace in February 2010, and played to a standing room only crowd. It is also safe to say that Castiglia won’t fly under the radar this time around, as he is coming off his most successful year as a recording artist. His latest CD, Keepin’ On, made a run up the National Blues Charts a year ago and hit #1 last September. It remained in the top 25 for several months, and was the #15 best selling blues album worldwide in 2010, according to Roots Music Report.

Castiglia played to a captive audience at Sheffield’s, performing some great blues standards and many of his own original songs from his impressive collection of CD’s, including Burn, released in 2002, The Bittersweet Sessions in 2005, A Stone’s Throw in 2006, These are the Days in 2008, and his latest album, Keepin’ On. Castiglia maintained an approachable and intimate style, introducing his mom and dad to the animal-friendly crowd, while talking about the loss of his beloved boxer, Jesse.

In 1990, Castiglia joined The Miami Blues Authority as lead guitarist and vocalist, and in 1997 was selected as the “Best Blues Guitarist” by New Times magazine. He was eventually discovered by Chicago blues great Junior Wells, who hired him as a guitarist/vocalist, and for several years he toured the world with his famous mentor. After Wells’ death he toured with Atlanta blues singer Sandra Hall before venturing into his promising solo career.

The Amelia Island Blues Festival at Main Beach begins on Friday, September 16th and features a wide range of musical talent over two days. Sonny’s Real Pit Bar-B-Que will be on hand serving many of their specialty items, as will the Palace Saloon, and selected other vendors, providing food and drink for the many blues fans expected to turn out for the first ever event of its kind on the island. Festival partner, Rayonier, is providing a second stage near the VIP area to allow for non-stop entertainment. Former State Representative Aaron Bean has signed on to assist as a celebrity “Master of Ceremonies” and will be joined by other local notables throughout the event.

One or two-day tickets can be purchased on line or at several local businesses and there is no charge for children 12 years of age and younger.