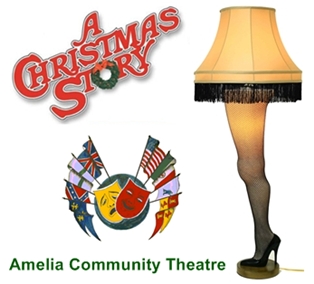 Come to the Amelia Community Theatre in December and be transported to a Northern Indiana Christmas where young Ralphie Parker dreams of finding a Red Ryder BB-Gun under the Christmas Tree. First, however, he must overcome unsympathetic authorities who insist, “You’ll shoot your eye out.”

The talented and skillfully clever Toni D’Amico directs a large cast through alleyway bullies, freezing flagpoles, a major award, and the Parker’s neighbor’s menacing dogs. Her experience unwraps a delightfully charming package for the audience, a must-see production that will put you into the holiday spirit. 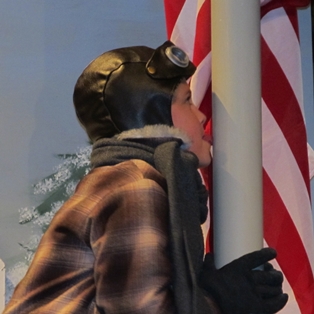 Ralphie’s quest for the “Official, Red Ryder carbine-action 200-shot range model air rifle with a compass and this thing which tells time built right into the stock,” is fast paced and captivating.

The cast includes 11 children, all professional and believable. Corey Oliver’s expressions as the young Ralphie are priceless, and Elizabeth Eberwine as Esther Jane (who has a crush on Ralphie) is just too cute.

Impressive is Devin Hughes’ performance as the grown up Ralph who talks directly to the audience, narrating the entire play with believable nostalgia. 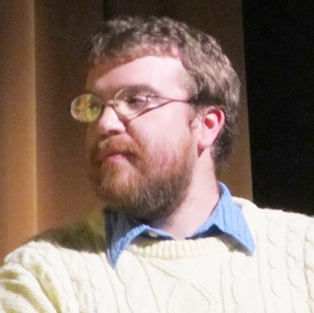 While this 3 1/2 minute video hardly does justice to a play that runs about two hours, be warned…

Do NOT Watch this video if you have never seen the movie! 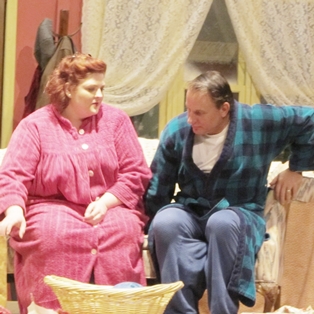 ACT is also helping to stock the Barnabus Food Pantry and they are asking you to bring non-perishable food items when you come to see the show. The most needed items are powdered milk, macaroni and cheese, oatmeal, cereal, pancake mix, syrup, canned meats, powdered potatoes, peas, pasta, rice, ketchup and mustard. Here is an astonishing statistic found on the ACT website:

“More than 17 million, or almost one in four, American children are at risk of hunger. In 2010,14.5% percent of households (17.2 million households) were food insecure. In 2010, 5.6 million households in the U.S. accessed emergency food from a food pantry one or more times. Florida ranks in the top nine states in America with a higher than national average household food insecurity.”