Amelia Island a Locale for Books and Movies 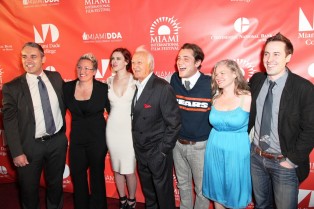 Cast and Directors/Producers of Diary of Preston Plummer

Last Friday I had a Danish writer and his wife staying as my guests at the B&B. Besides being a novelist and documentary writer, he also writes travel reports and vacation books (like Fodor’s) for the European markets. He had learned about Amelia Island through reading a Tim Dorsey book that briefly mentioned Amelia Island and Fernandina Beach. This got me thinking about the exponential exposure our little island is getting through novels set here, movies filmed here and authors settling here. It is probably not news to anyone anymore that celebrity legal eagle novelist John Grisham is finalizing a home here on Fletcher Avenue, while during last February’s Amelia Island Book Festival I was amazed how many writers are actually living on our shores.

Just two week ago Judie posted an introduction to Gary Williams & Vicky Knerly who recently released their second e-novel (Three Keys to Murder, Suspense Publishing, $2.99.)  The story takes place primarily on Amelia Island where journalist, Fawn Cortez, is struggling with her father’s recent death.  When a series of grisly killings rock the island community, Fawn uncovers a startling link between her father’s quest for a legendary treasure, the serial murders, and the odd circumstances surrounding the death of Osceola, a famous Seminole Indian, in 1835.

Asked why this mortifying scenario was set on tranquil and peaceful Amelia Island, the writers retorted: “With our debut novel, Death in the Beginning, we leveraged the history and attractions of St. Augustine, Florida with suspense and action.  For Three Keys to Murder, we chose Amelia Island because of its equally fascinating history and relevant historical structures. It was not always as peaceful as it is now. A focal point of the new book is Fort Clinch, built in the mid-1800s and considered one of the finest examples of third-system masonry construction.”
“In addition to Fort Clinch, you’ll find the heroin in our story journeying to the Amelia Island Lighthouse, Amelia Island Museum, Centre Street, the Bosque Bello Cemetery, and many other historic fixtures in and around Fernandina,” Williams adds.

Research has been paramount to Williams’ and Knerly’s work and this latest novel was no exception.
“We love digging for facts, especially when we uncover bits of history that aren’t widely known,” Knerly says.  “We find that most readers, even those who love fiction, embrace learning something new in a novel.  For example, few people know that Amelia Island is the only U.S. community to have been under eight different flags during its history, and another fact, which originally seeded this story, is the bizarre history of what happened to Seminole Indian Chief Osceola’s head following his death in 1835.”

The rich history of Amelia Island captured in many formats.

Williams adds, “We try to add interesting facts into everything we write, weaving reality within the fabric of fiction.”
“Often, our research turns up jewels of information that we can incorporate into the story, such as how the Amelia Island Lighthouse was originally built on Cumberland Island, Georgia, and later moved brick-by-brick to its current location in Fernandina.  This nugget of information fit perfectly with what we were trying to do in the story when Fawn is forced into a treasure hunt,” Knerly says.
Like all novels, though, ultimately the story is fictitious.

“Of course,” Williams says, “but our job is to use enough facts and ingrain enough real history so that the story is plausible to the reader.  In the Da Vinci Code, for example, Dan Brown incorporated so much history that the line between fact and fiction became blurred for many readers.  It was a testament to his tremendous research that so many people became outraged at what was clearly a fictional story.”
Sometimes, research will uncover a fact that seems tailor made for a story.
“Each time we’ve conducted research for a manuscript, we’ve found some quirk, some connection, that we had not originally planned which fits perfectly with the story.  In Three Keys to Murder, we were pleasantly surprised to discover Fort Clinch’s namesake, Duncan Lamont Clinch, fought in the second Seminole War in Florida in the 1830s against, none other than the Seminole Indian, Osceola, whose history figures prominently in the story,” Knerly says.
“It was fun to set a story on Amelia Island,” Williams adds.  “Who knows, we may do it again in the near future.  Northeast Florida and Southeast Georgia are rich with fascinating history.”

Another local novelist, Ian Murray, who resides in Oyster Bay Harbour, has also just published his second novel, the Final Doctrine, and although the story is set in a global locale, Murray also pulls a lot of his intrigue from historical facts woven into fiction. For the release a book signing/release celebration party at the Oyster Bay Yacht Club has been scheduled for April 19 at 6pm. If you’ve read Murray’s special ops semi-autobiographic action thriller “The Legends of the Black Orchid” you may want to go meet this fascinating story teller.

And last but most certainly not least, the local Amelia Island premiere of “The Diary of Preston Plummer”, which was filmed in its entirety on Amelia Island and Oyster Bay Yacht Club, is set for Saturday, April 21 at the Movie theatre on 14th Street. The movie which stars Bruce Willis and Demi Moore’s daughter Rumer, received accolades and a red carpet treatment during last month’s Miami International Film Festival. Many locals played extras in the suspense movie and it is anticipated that the viewing will be for a sold out audience.