Talented and varied line up, great weather, smooth organization and soulful ambiance, made the 2014 Blues Festival one to remember. 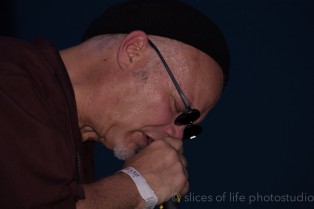 The 2014 Amelia Island Blues Fest last weekend had everything going for it. The weather stayed bluesy warm with beautiful sunsets, the beer and bbq was excellent, the crowds were ample and relaxed and the blues was magnificent.

On Friday evening Festival veteran Roger “Hurricane” Wilson from Atlanta started the show off with our local high school blues band, followed by  The Mojo Roots who had traveled all the way down from Ohio to introduce us to their mix of soulful Jonny Lang inspired blues. Quite an eye opener.

On Saturday the show opened around noon with no one less than Ben Prestage’s One Man Band. Absolutely amazing to see one man coordinate all his limbs to produce music and rhythm of superb quality, while his mind independently produces lyrics and vocals of an Americana lifestyle, many of us have lost and forgotten. Especially liked the closing of his set when he introduced his band. Very witty.

When the following act set up its equipment I got intrigued by the Amp combination of a Marshall, an Avatar AND a Fender amp for the lead guitar of young Matthew Curry. Tell you honestly, the kid blew me away once he got his bearings and the blues. Great guitar player and blues voice beyond his years. Since the inception of the first Blues Festival in 2011, we kind of followed the recipe of having a young and upcoming talent and at least one female blues performer in the line-up. This year once again proved that to be a great formula with Matthew Curry and Samantha Fish.

Next in the line up was Bernard Allison, late Luther Allison’s son, who knows his way around “his daddy’s” guitar. Great show! Luther was followed by earlier mentioned Samantha Fish and her trio, also from the Ohio area. Comparisons with last year’s phenom performer Anna Popovic were inevitable. Samantha’s blues belting was a notch up, while her guitar playing was a notch down, but that could have been her pedal settings, which were a bit to harsh. Beautiful and original guitars however.

Moving on we were treated by the beautiful haunting sounds of Chicago blues veteran John Primer whose show was solid and introspective. And words cannot really describe the sounds and emotions coming from headliner act Curtis Salgado in the beautiful setting sun. Soulful, entertaining, professional, flawless, engaging; those are just words trying to give an impression. You had to be there to get the overwhelming experience of great blues on the ocean.

See you next year.