Blues is as Southern as grills and grits. Fernandina Beach welcomes its newest annual signature event with an impressive line up. 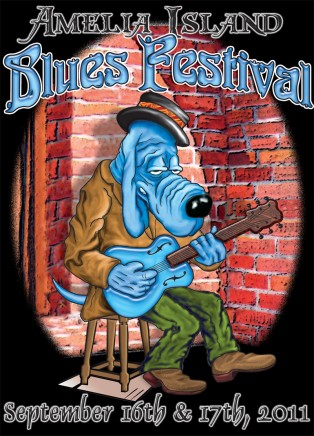 “As you cross onto Amelia Island you will actually feel your pulse quicken, but in a good way.
The radio goes up a notch as you roll into historic Fernandina Beach….. like the smokey blues of the Old South.
Out near the crossroads of Fletcher and Atlantic a new ritual is giving birth to the sound of a culture once feared lost.
But for this one mystical moment the ghosts of Mississippi mingle with the spirit of pirates past and present.  Have no fear…
The Amelia Island Blues Festival will steal your soul and give it back again.”

With these words The Amelia Island Blues Festival Committee goes into the new year as the September planned event gains momentum.
Signed contracts and final stage negotiations will bring top international performers like Pinetop Perkins, Willie “Big Eyes” Smith and Albert Castiglia to the stages, with a national and regional line up of top blues performers such as the Sean Carney Band, the Shuffle Junkies, Roger “Hurricane” Wilson, Bill Sheffield, topped off by powerhouse performances from Blistur, the Karl Davis Band and more local and regional talent.

Confident that with additional sponsor support, merchandise sale and advanced ticket sales, the organizers have a couple of additional headline surprises in store. In order to facilitate T-shirt sales and keep the public informed about  the ongoing news, the committee just launched the website www.ameliaislandbluesfest.com which will weekly update and report on new developments in this exciting Festival that has already been earmarked as a Signature Event on the official annual island event roster. The dates: September 16 and 17.

The organization which has applied for a Florida 501(c)3 non profit status, has selected the local Baptist Health Hospital organization as the recipient of potential organizational surpluses, in recognition what the Hospital has done over the years for our community. Also research is being done on the possibility of supporting elderly Blues Performers, who have fallen on hard times.

Nobody in the organization is taking any compensation according to the initiators, who are all seasoned and lifelong blues fans, a music art that was not so long ago pronounced almost extinct. With the untimely passing of Stevie Ray Vaughan in the early 1990s, guitar heroes went out of the limelight. But with the incredible craftmanship and devotion of young guitarists/singer/songwriters like Kenny Wayne Sheppard, Jonny Lang and the amazing Joe Bonamassa, blues has found a new and rewarding life.

The origin of the Blues can be traced to the blending and sometimes clashing of African and European music. In the mixing bowl of America, the ingredients were added, set to bake in the hot Sun of the South and become the Blues.

The main instruments in blues music are guitar,piano and the harmonica, also called a harp, all three instruments that had their roots in Europe. The rhythms were mostly West African, enhanced by the “sharecropper field hollering songs” during and after  the era of slavery. One worker would holler from one side of the field, expecting a return response from the other side of the field. While it was a form of communication in those early days. However the Blues performer in the juke joints of the late 19th and early 20th century, right around the time Florida’s Oldest Saloon, our own Fernandina Beach’s Palace Saloon, opened its doors, asked and answered him or herself. As an exact music development Blues is hard to trace, because of the many influences it received. Mississippi Delta and Texas differ but are mostly acoustically performed; while cities such as St.Louis and Chicago gave berth to electric blues and added the horn sections.But even with all the influences Blues would not exist in today’s form, if not nourished by the South.

Being from the Netherlands, I was often surprised to learn that I had heard about Robert Johnson, Bessie Smith, Leadbelly and so many other early masters, long before people in the US had heard about them, until I realized these people were not from the South.

Blues is a true Southern Heritage and we are proud to see it back on our island’s shores. Watch the video and see if you remember the days of the past in so many clips.