Performing with Ms Meyers will be pianist Max Levinson and Christopher Rex, principal cellist of the Atlanta Symphony Orchestra. 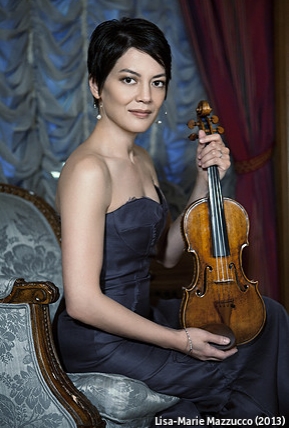 This 7:30 performance, From Russia to Broadway and the Movies, will be held at Amelia Plantation Chapel, 36 Bowman Road, Amelia Island. Tickets for this and other upcoming concerts are available at www.aicmf.com or by calling 904-261-1779.

Ms Meyers is celebrated around the world for her brilliant artistry and ability to connect with audiences from the concert stage, online, and in television and radio broadcasts. Of a recent performance, The Los Angeles Times wrote that she displayed “vigorous mastery, unflinching technical skills and stylish elegance.” And the Denver Post hailed her as “the coolest thing to happen to the violin since Stradivari.” She performs on the ‘Ex-Vieuxtemps’ Guarneri del Gesu violin, dated 1741, which was awarded to Ms Meyers for her lifetime use. This instrument is considered by many to be the finest sounding violin in existence.

She regularly circles the globe, performing in recitals and as guest soloist with many of the world’s greatest orchestras in North and South America, Europe and Asia. Recent appearances have been with the Orchestre de Lyon under the baton of Leonard Slatkin, the MDR Leipzig Orchestra, the London Symphony Orchestra, and the Chicago Symphony Orchestra.

Ms Meyers also is a best-selling recording artist, having released 30 albums. In recent seasons, she released the Four Seasons: The Vivaldi Album, and Air, the Bach Album, on eOne Music. Both recordings debuted at #1 on the classical Billboard charts and received great critical acclaim. eOne Music recently released The American Masters, featuring the world premiere recordings of the ‘Mason Bates Violin Concerto’ and J’ohn Corigliano’s Lullaby for Natalie’, which was written for Ms. Meyers’s first born daughter. Also featured is the ‘Samuel Barber Violin Concerto’ with the London Symphony Orchestra, conducted by Leonard Slatkin.

Performing with Ms Meyers will be acclaimed pianist Max Levinson and Christopher Rex, principal cellist of the Atlanta Symphony Orchestra and the Festival’s general and artistic director.

Now in its fourteenth season, the winter series of the Amelia Island Chamber Music Festival will continue with the Amernet String Quartet on February 10, the Christiania Trio on February 12, countertenor Terry Barber on February 17 and the Kruger Brothers on February 24. Then, on March 1, the Festival will present violin virtuoso Joshua Bell, universally hailed as one of the greatest violinists on the world stage. The Festival’s spring season will commence on March 29 with a performance by internationally acclaimed pianist Anton Nel and conclude with eight concerts in May.

About the AICMF
The Amelia Island Chamber Music Festival is nationally recognized as one of the foremost music events of its kind. The Festival is a not-for-profit, tax-exempt organization under Section 501(c)(3) of the Internal Revenue Code.