A central event register would prevent competing with other events on same dates and help organizers reach their goals. 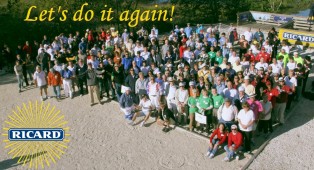 See you for Pétanque in November

For almost 18 months we had been prepping for the first Amelia Island Blues Festival and then it came and it went and we’re already working on putting the second one together for next year September 14,15 and 16. Yes, three days of Blues and BBQ at the Beach instead of two, as the organizers were collectively attacked by an unguarded moment of masochism while celebrating the success of the first event.

And so we have officially moved from Summer into Fall, and in shock I realize that we’re only just a few events and one festival away from another year sent off into history.

This weekend starts the week long Amelia Island Jazz Festival with the last Sounds on Centre of the Year today. We’re already looking at the third edition of the Petanque America Open in November, yet the first one held in 2009 is still lingering fresh in my digital storage banks.
Philip Boets, owner/operator of Pétanque America, has almost exponentially grown the event from 80 teams in 2009 to 140 teams this November, with players coming in from as far away as Europe, Israel and Southeast Asia.

The traditional French Sport, with a name nobody locally could pronounce just a short couple of years ago, now sees playing courts sprout up in private backyards and residential developments across the island. The local club founded last year has dozens of members who come out every Wednesday evening and Saturday Morning to play the game, that could very well be France’s favorite pastime.

Here is the official list of Events, Festivals and Celebrations for the remainder of 2011

We all agree that Amelia Island has a very active calendar of events every year. Possibly the only month we’re kind of slow is January, but as soon as February comes along the Festival Season starts with Book and Film Festivals and doesn’t stop from there until the middle of October.
Since the success of many events and festivals depend on sponsor contributions, donations and/or ticket sales, I do wonder why so many events are scheduled on competing dates. The Animal Support organization RAIN planned a major fundraiser on the Saturday of the Blues Festival. Rotaries, Kiwanis, Humane Societies, Micah’s Place and many other organizations and groups on the island often unwittingly organize fundraisers on competing days with each other, instead of spreading them over the available weekends. Of course this does not always mean that the same groups of people are targeted, but take for example the second weekend in November is proclamated by the city as Petanque America day, hence the International Tournament. Lots of local people will actively or passively attend the event, yet Rotary Sunrise organizes on the same Saturday their Amelia Challenge, while Quality Health of Amelia puts up a Car Show with all the trimmings. In contrast there is nothing organized in the weekends of October 22 -29 or November 5th except for the Veteran’s Day Parade which already brings people to town, ready for more action than just a one hour parade.

We have noticed on many occasions throughout the year how events splinter attendance and good hard work of organizers goes to waste, because of poor attendance.  Considering a continuous slow economy and tight money policies it would be smart for many organizing committees to plan their event timing away from directly “competing” events and a central register of ALL published events would be a great start. Maybe just a thought for next year.