The annual Holiday Cookie Tour drew a lot of people to the island's Bed and Breakfasts. 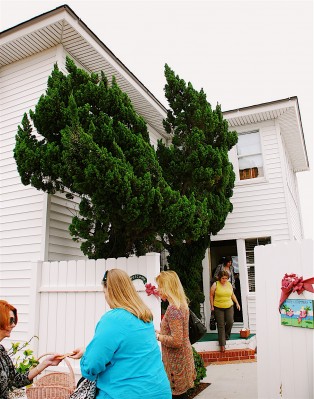 I don’t know why I was surprised to learn that more than 500 tickets had pre-sold for this year’s Holiday Cookie Tour of Inns on Amelia Island, and actually witnessing the continuous flow of people between noon and 5pm yesterday, made me wonder how many more people had purchased the tour purely in a walk-on impulse.
At times it was standing room only at the beautiful Amelia Oceanfront Bed & Breakfast on Fletcher Ave.
Many tour guests decided to “hang-out” a bit longer right on the comfortable beach chairs and lounged with some cookies and hot or cold tea, while watching the waves roll in.
People seem to be coming from as far away as Bradenton, FL and as close as St.Marys, our Georgian neighbor to the north.

The Horse-drawn carriages in town and the Trolley and Taxi Services had a busy afternoon, keeping up schedules, constantly ferrying people between historic downtown and the two beach properties.

The annual Holiday Cookie Tour is organized by the Amelia Island Bed and Breakfast Association and gives visitors a glimpse of the history of the participating Inns decked out in Holiday Spirit and serving freshly baked cookies and afternoon tea.  The concept of Cookies, Christmas and Compassion not only highlights the peaceful, beautiful essence of the Holiday Season, enjoyed in mostly historic settings, part of the proceeds from ticket and book sales also benefits individuals and families in crisis in Nassau County through the tireless contributions of the Barnabas Center which receives parts of the Cookie Tour and Recipe Book sale proceeds.

Cookies were a big thing in my native Holland, which is often incorrectly credited as the birth place of cakes and its smaller version Koekjes (or cookies). Old Persia, where sugar was refined for the first time, was probably the real birth ground for baking cakes, but yes it was in Holland, where, in order to save dough, bakers first tried out the heat of their ovens with small pieces of dough, thus inadvertently creating cookies.

I remember growing up the many wooden molds Mom had stored in the cellar waiting for the Holiday Season to arrive. By late November she asked us to bring them and the cookie baking season began. For the next month, actually until Three King’s Day on January 6th, the house smelled like a fresh bakery, slightly differently flavored as the Holiday Season progressed. Speculaas en pepernoten were the first cookies in the line up. Typically made from white flour, brown sugar, butter and spices, which include cinnamon, nutmeg, cloves, ginger, cardamom and white pepper, almond slivers were often included in the dough. The Pepernoten were simply rolled into small balls and baked but the speculaas production was something else. The handcarved molds Mom had collected and/or inherited included small and large windmills, elephants, pirates, saints, horses, christmas trees, sailboats, noblemen and Sint Nicholas.
She baked batches for days in a row and with five sons and their friends constantly putting hands in the cookie jars, this was often not even enough. After St. Nicholas Birthday Celebration on December 6th, she took on taai taai cookies and gingerbread, often using the same molds. 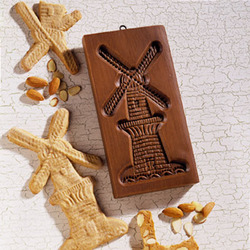 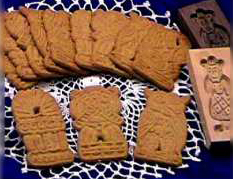 As the month of December progressed Mom started preparing the cookies for the Christmas Tree. Many different shapes of chocolate, almond, sugar and butter cookies, all with a neat hole in the center, were hung all over the Christmas tree attached with red ribbons. The next part of Christmas baking concerned the Kerststollen, some of the richest, best tasting Christmas Bread you’ll ever taste. Because we literally lived under the smoke (coalmine stacks) of the German city of Aachen, (Aix la Chapelle) to the East and Belgium 15 minutes to the West, Mom also baked some Aachener Printen and Belgian waffles on occasion.
With the two days of Christmas behind us it became time to prepare for New Year’s Eve and New Year’s Day Traditions, which included Apple Beignets, Rum Soaked Raisin Dough Balls and Nonnevotten or Poeffels, the last one being naughtily tasty as the name comes from a Limburg Dialect and refers to a Nun’s Bottom, more precise because the shape reflects the bow Franciscan Nuns used to wear on their butts from the 16th thru early 20th century, in that part of the world. 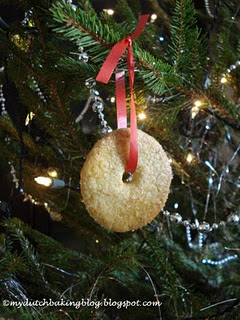 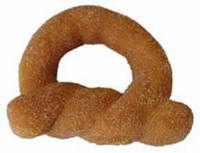 Nonnevotten originated near my hometown

Mom’s Holiday Baking Season ended with the preparation of Dough Balls for Three Kings Day, most  of them filled with a rum soaked raisin, (she made sure we slept good at night) – but in ‘Oliebol’ she exchanged the raisin for a hard pea or bean. The one out of her 5 sons who would get the bean or pea, was officially relieved from having to help taking down the Christmas Tree and the Holiday Decorations.

Oh sure we had Sweet, sweet Holiday Seasons back in the days with a huge variety of cookies at our fingertips, fresh and homemade.
Be prepared to find these Dutch traditions at the Amelia Oceanfront Bed and Breakfast during next year’s 2012 Holiday Cookie Tour, as TJ and I are going to be the new innkeepers as of January 1, 2012.